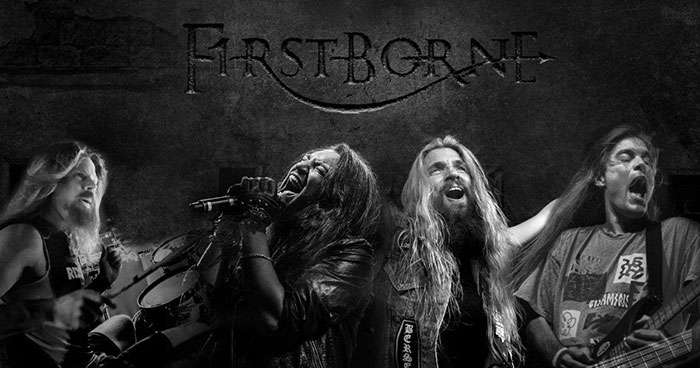 Firstborne has unleashed a crushing new single "Intercontinental Champions", which premiered earlier this week on Metalcore Nerds Podcast (Idobi Howl). The band itself is well qualified for the Intercontinental Champions moniker, featuring the inimitable Chris Adler (drums) and James Lomenzo (bass) alongside soft-shred pioneer Myrone (guitar) and rising star vocalist Girish Pradhan. The quartet has released a new single (or two) each month throughout 2022, fearlessly exploring the sonic landscape of thrash, metal, hard rock and the spaces between. Their new song was self-produced by the band with mixing / mastering by longtime collaborator Machine.

"Intercontinental Champions" punches you in the face with a ferocious lead riff and then softens the blow with a profound melodic sensibility and more than a dash of 80s' metal nostalgia, serving as a perfect reminder of the groups musical pedigree. Adler contributes a blistering percussion performance, with bassist James Lomenzo holding down the low end with a pulsating groove. Myrone is at it again flexing his ubiquitous playing style that is equal parts technically impressive and approachable - his acrobatics on the fretboard don't distract from his ability to write a damn good song. Girish Pradhan takes command of the song with a soaring vocal performance, jumping octaves and creating fireworks with his unmistakable voice and attitude.

Drummer Chris Adler has this to say about about the new single:

Awh! Our pandemic baby 'Intercontinental Champions' has finally been born! Will ya look at those riffs!?!? Kidding aside - this one gave me goosebumps as it came together. Glad to continue to surprise ourselves and our audience with songs as contagious as this. Hope you love it as much as we do and you'll hear from us again next month!