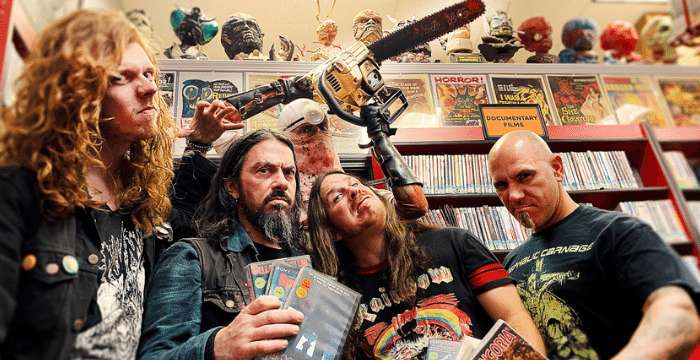 Exhumed has premiered a new track "Sick at Heart" via The Decibel Flexi Series which you can pick up in the latest issue of Decibel Magazine. The song is available on a flexi 7" included the magazine.

The track has also been uploaded to Soundcloud; take a listen below.

Decibel Magazine said of the track:

Somehow it's been nine years since death metal gore hounds Exhumed first disgraced the Decibel Flexi Series with "The Beginning After the End," a wicked little ripper recorded during the sessions of 2013's Necrocracy LP. Well, the streak of 114 Exhumed-less flexis ends now via "Sick at Heart," an exclusive new headcrusher that was actually recorded after Exhumed's impending new LP To the Dead (out October 21 via Relapse).

Since we're such bleeding hearts, we invite you to hear the 143rd entry in our vaunted series below. Then you can head off to the dB store where we have an extremely limited amount of the issues containing the Exhumed flexi available. Don't wait, this might be the last day to get one!