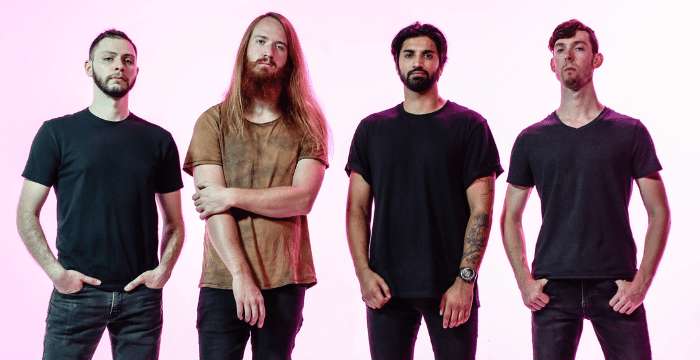 Detroit-based prog metal band Inhale Existence bring us another taster from their upcoming debut album The Spiral, which was recorded, mixed, and mastered by audio engineer Jamie King (Between the Buried and Me, The Contortionist, Scale The Summit) and is being planned for release in 2023.

"I think fans of technical music who also enjoy catchy riffs and melodies will really enjoy it. I drew inspiration from bands like Necrophagist and Archspire to write the song; I even wrote the final riff and outro of the song purely as an homage to Necrophagist. Nikhil wrote about his love for music and being a part of the music scene, which is something I think we all identify with. As an aside, I like that our most technical track to date is about a love for something, in contrast to much of the lyrical themes found in tech death."

Bludgeoning, and chaotically heavy, all the tracks were written remotely during the pandemic. The band was founded just before Covid impacted the US; the pandemic was officially declared days later. They each individually worked from home during those rough months to write and shape the music for their debut.

The forthcoming record has been arranged to be heard as a full album from start to end. The album will have a lot of weird and interesting twists, musically speaking, but they all feel natural and help contribute to the listening experience. The band made "The Spiral" to play like a concept album, but only musically - the lyrics are all thematically linked and exist in the same universe, but there's no single story being told.

"Our first album "The Spiral" is a work that we're all exceptionally proud of. It's a landscape of melodies portrayed angrily, with tinges of extreme melancholy. It's brutal, heavy, and infectious. We can't wait to share the rest of it with you."

All band members are seasoned touring musicians. Nikhil Rao (vocals) toured with A War Within, Sam Mooradian tours with Fallujah, James Knoerl (drums) has toured with The Faceless and plays in Aviations and Gargoyl, and Brian Krahe (bass) has toured with Abiotic and is a member of Krosis.

All together the quartet brings forth tight playing and a huge stage presence. They have evolved since their inception, with Nikhil digging deeper on lyrical content, inspiring Sam to push the music to heavier and darker places. The band is currently writing their follow-up to "The Spiral".

Fans of progressive metal and tech-death, along with bands like Periphery, Necrophagist, Archspire, Meshuggah, and The Dillinger Escape Plan, will enjoy having their auditory senses assaulted.

Their debut album "The Spiral" is being planned for release in 2023.

Take a listen to their previous singles "The Spiral" and "Absolve" below.