Kentucky Irate Fest has been canceled, so what happened? 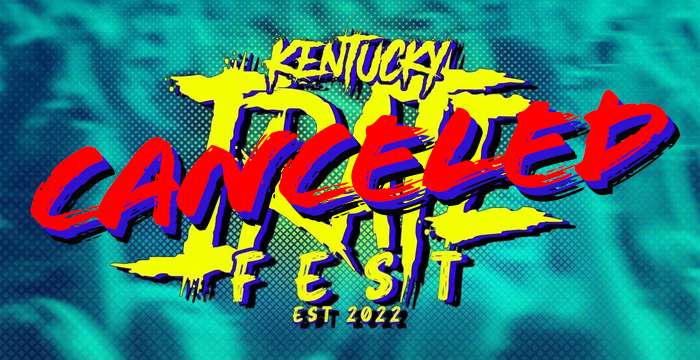 In the wake of an unprecedented number of band cancellations, amid sexual assault allegations between a former festival partner and bands involved, the Kentucky Irate Fest has finally canceled itself. Keep reading below as we attempt to describe the events that led up to today.

The ill-fated festival was set to take place from August 26 to 28 hosted by MG's Prime Time Cafe in Louisville, Kentucky, situated on a two-acre plot behind a Marathon gas station and a Dollar General. 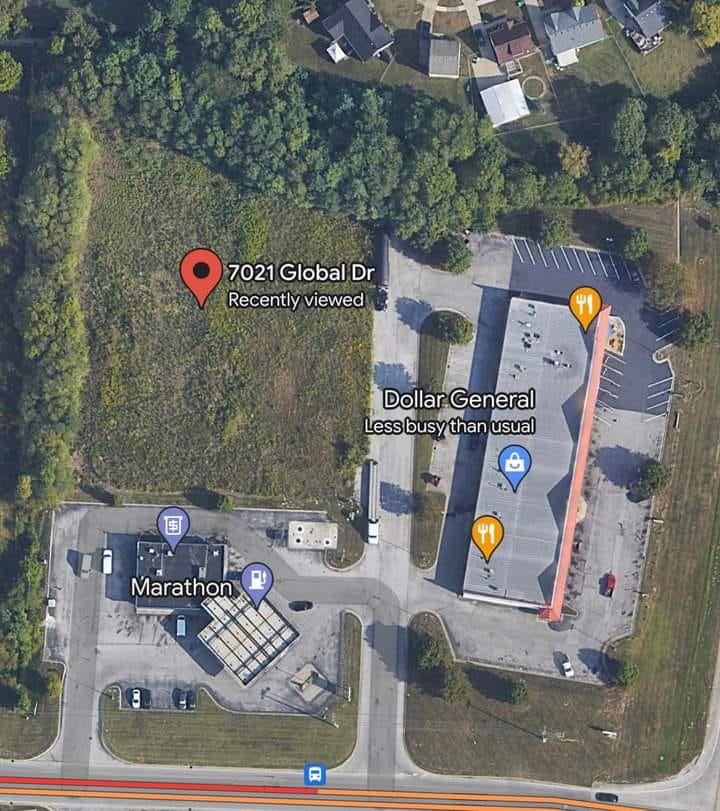 While not your standard venue, the promoter, Joseph Borland, assured everyone, in a video walkthrough of the festival grounds, that everything was well thought out. During the video, Borland mentions a Sweetwater sponsorship to provide backline equipment, a statement which Sweetwater denied was ever in effect via support message. He also suggests upgrading to VIP, especially if you'd like to get out of the sun, as there is no natural shade for the parking lot based fest.

Despite Kentucky being a smaller market, the festival featured some big names, due in large part to Tracy Cook, of Until the Dead Walk, who said he helped book many of the bands involved in the festival. This, however, may have doomed the festival in the end, as the promoters would need to fund guarantees and advances to the headliners.

To fund the guarantees, the promoters decided that local bands would need to sell a combined total of 400 tickets to their fans as a requirement to play the festival. This was to be communicated by Cook to the bands according to a statement later issued by the festival.

"My former partner, who is apart of the local Louisville scene, was given the task of getting the locals for this event. He told me on May 9, 2022 that all local bands performing on the bill would be required to sell tickets and that they were notified."

advertisement
The first rumblings we heard were from local Kentucky bands who were unhappy at the requirement that they would be forced to sell tickets to the event. According to the statement, on May 9, all local bands were to be notified that they would be required to sell tickets. There is doubt as to whether the bands were clearly informed about this, as Borland stated in a comment on a Facebook post that it never actually happened.

While not an uncommon practice at many shows, it is less common in festival settings for locals to be required to sell tickets, and not all promoters enforce it. It is alleged that the promoters of Irate Fest were rude to bands who questioned the move as the date approached, leaving a bad taste in the mouths of many of the local Kentucky bands.

On Friday, August 12, Borland took it further, as Braeden Wessel, a member of Wake Up in Tsunami, one of the bands playing the fest, posted on his Facebook page an alarming message from Joseph Borland, the festival's promoter. The message seemed to threaten Wessel's job for not selling tickets, as one of the festival investors allegedly owned the business Wessel works at.

Borland confirmed this by posting a rebuttal from the Kentucky Irate Fest Facebook page, explaining why he did so, and shifting the blame to Cook. 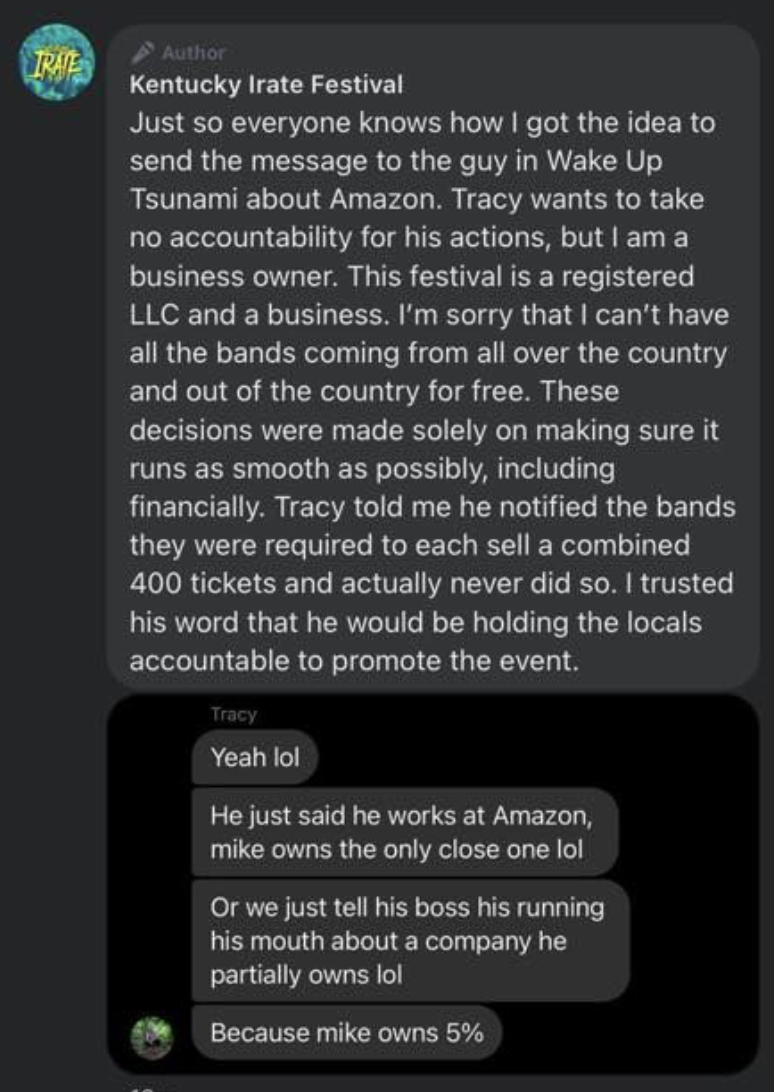 Soon after that, Wessel started a Facebook group called Kentucky Irate Fest - don't support it! that has since grown to more than 2.5k members. On this group, he started a thread to share evidence of harassment from the promoters, and information about bands dropping.

What happened next was a domino effect that played out over the course of a few days. The first local bands to officially drop on Sunday were Isolator, Wake Up in Tsunami, and Artica who had "personal differences" according to the promoter. The Kentucky Irate Fest then posted a statement on their Facebook page.

More soon dropped from the fest, including Left to Suffer, Belushi Speedball, Sero//Tonin, Guerilla Warfare, Cohen, and Foxbat. We presumed over the issue of ticket sales. The promoter reassured fans, through an announcement later that day, that they had over 15 inquiries from other locals willing to fill the holes left by the departing bands, and that every headliner would be performing as scheduled.

Then, there were the assault allegations delivered through a series of personal statements, starting on Tuesday, Aug 15, when Melissa Eagle, vocalist of dropped-from-the-bill band Sero//Tonin, accused Ren Affk of Until the Dead Walk of rape in a Facebook post which you can read below.

A few hours later, the Festival responded by removing Until the Dead Walk from the lineup.

Borland, who was also Until the Dead Walk's manager up until the allegations, reached out to Eagle via Facebook Messenger through the Kentucky Irate Facebook page, screenshots of which we won't share here, but can be found in the Kentucky Irate Fest - don't support it! Facebook group.

In those messages, it came to light that Eagle's band chose to drop from the festival after they found out Affk was a 5% investor in the festival, to which Borland responded that he would have never worked with him had he known the accusations.

On Wednesday, August 17, Affk responded via Facebook post with a statement, along with a series of DMs between himself and Eagle.

Beyond these statements, and those reported on by Loudwire, we have not heard anything further on this situation, though we expect more to develop given how vehemently each party seems to be holding their ground.

On the very same day, the festival page posted an updated lineup to ease fans' worries, as a lot of drama had transpired up until this point. The festival tried it's best to reassure everyone:

"Yes, our venue is behind a Marathon gas station, it is a 2 acre lot that has plenty of room for stages... YES, our festival is still happening... we promise you it will still be an amazing event!"

By this point it seemed like the festival was all but doomed when even more bands and the event's host pulled out. Evergreen Terrace and Traitors pulled the plug as well, and it seemed there might be a critical mass of cancellations to warrant the festival packing it up and calling it a loss.

The thing is, there were still plenty of big acts like Madball, Slaughter To Prevail, Oceano, and Norma Jean, who all most likely signed contracts and apparently may have been paid guarantees fronted by the locals. Many of these touring acts had yet to comment whether or not they were still playing the festival.

The following day on Thursday, Aug 18, the hosting venue, MG's Prime Time Cafe shared a statement announcing that the fest was no more, asking fans to check the Irate page for more details. The festival, though, posted a meandering, lengthy statement, most likely written by Borland apologizing for the events that transpired, for his actions, as well as the partners he recruited in the endeavor. The post did not seem to issue a cancellation of the event.

Roughly eight hours later, in an odd, last-ditch effort to save face the evening before officially canceling the event, the festival issued another statement that blamed Kentuckians for damaging their own local economy.

Finally, the next day, the Kentucky Irate Festival called it quits, with one last statement.

People love to watch dumpster fires, especially when it's a failed music festival. From Woodstock '99 to Fyre Festival, people eat that shit up, and no one can turn away from the trainwreck. Fortunately, for metal fans in Kentucky, the latest festival failure played out online, rather than out back of a dollar store, where who knows what may have occurred.

After it was all said and done, Mike Ziemer (Furnace Fest, So What?! Music Festival) left a rather poignant post in the Kentucky Irate Fest - don't support it! Facebook group. 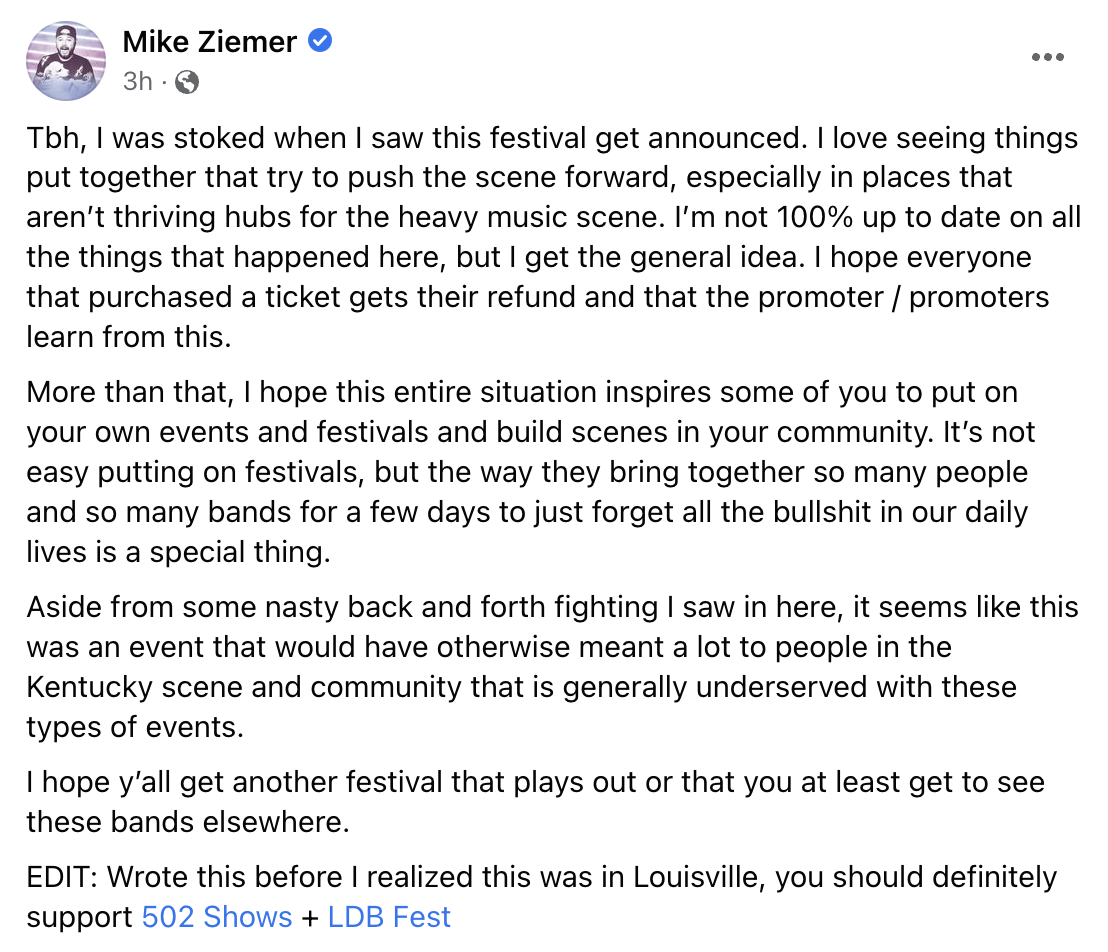 If you just can't get enough, we'll leave you with an audio rundown of the whole situation from the perspective from one of the bands involved. The Browning vocalist Jonny McBee has shared his insight into the situation via episode #43 of his podcast Burn This World, and it's certainly worth a listen.