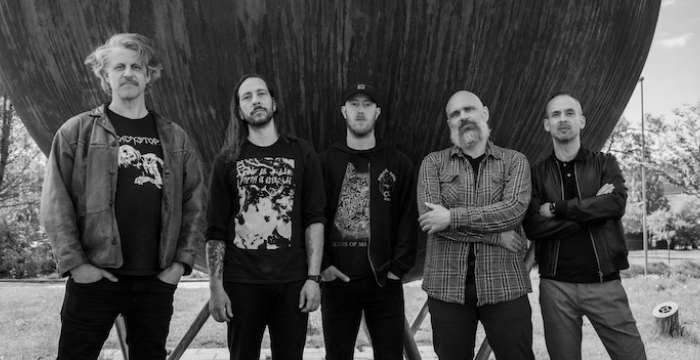 Swedish crust/death-metal unit Industrial Puke featuring members of Burst and Rentokiller have just unleashed a new track from the band's forthcoming debut EP Where Life Crisis Starts, which is set for release on September 16 via Suicide Records.

Titled "Industrial Puke", this new track is now playing at No Clean Singing, who had this to say about the EP "This bleak and brawling bombardment of an EP as a whole is long enough to get your pulse pounding hard and fast, and so compulsive that it's really easy to run it through a bunch more times in a row."

Linus Jägerskog from Burst and Jens Ekelin from Rentokiller started Industrial Puke out of their common love for Disrupt and Dismember, along with a pressing need to make music for imminent affect release.

After a long period of writing, finding band members and recording, the debut single "Mental Taxation" was released in June of 2022. The single spawned a partnership with Suicide Records for the release of their debut EP "Where Life Crisis Starts" in September and a full-length album titled "Born into the Twisting Rope" is already set for release in late spring of 2023.

The EP is a direct bombardment of crust, death metal and hardcore minced down to four relentless songs about failing yourself and the men that fail the world.

If you missed it, watch the music video for "Mental Taxation" here.