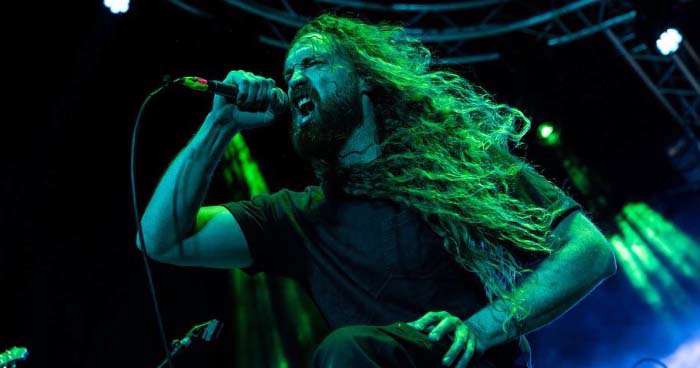 Last night in Los Angeles The Faceless played their first show in nearly two years. The group appeared on stage with Black Crown Initiate vocalist James Dorton. After the show, they took to social media to announce that in fact, James has joined the band.

"We are thrilled to announce the one and only James Dorton as our nee permanent frontman! You may know him from his previous band, Black Crown Initiate. I think I speak for all of us when I say that James is a monster and master of what he does and we are thrilled to have him in the band."

There is no word yet on any new music coming from the group and James as of yet.

message board is thriving with two posts today. certainly can't be new management's fault. maybe their burner accounts will join the party soon!

Band hasn't been good since Akeldama.

one of my favorite bands to read news about, shoulda got phil or rick ta life tho

How many members has this band had now? If you want a better version of these cucks try out The Zenith Passage.

well that's one way to announce that Black Crown Initiate have broken up lmao.

Doubt they broke up. faceless do like an album every 12 years or something and it's boring

while that's true, "you may know him from his previous band" sure makes it seem like they broke up lol.

It clearly says "previous band". Michael Keene wouldn't lie to us right? He wouldn't create a perfect lie to make us believe one thing when really another thing is happening right? Right Michael? You wouldn't tell me you were playing a show and take my money only not to play it? What's in your back pocket? Is it a lie? No no, that must have been my mistake. I know you would never lie to me.

Did Michael Keene break his arm at the show? Heard he is dying from playing those faceless tracks for far too long

Marty from Zao here. This band's lineup changes give Zao a run for its money.

How has the news of Keene's incoherent rambling and them playing 2 hours late last night not hit this site? It's everywhere else. New owner f*ckin up

"as our nee permanent frontman" This is funny on several levels.

while that's true, "you may know him from his previous band" sure makes it seem like they broke up lol. The other main dude in BCI joined Rivers of Nihil so I'm guessing the band is done.

How is this band still a thing? Are the "members" using it as clout to get into other bands? or are their day jobs at Lowe's that embarrassing they have to be in The Faceless.

How has the news of Keene's incoherent rambling and them playing 2 hours late last night not hit this site? It's everywhere else. New owner f*ckin up What happened ? Link me if can

Lol who? No one cares.

Lol who? No one cares. We literally all care and are talking about it, are you f*cking blind?

If you rearrange the letters in "The Faceless" you get "who cares."

Too much peepee in my weewee

Lambgoat is just slow 4chan at this point, exactly mirrors the trends on that site but always with a 5 year delay. Have fun getting increasingly frustrated by the "exploring anonymous social media platforms because of the 2016 election" newgay crowd that doesn't understand or rewrites your jokes and culture

How has the news of Keene's incoherent rambling and them playing 2 hours late last night not hit this site? It's everywhere else. New owner f*ckin up What happened ? Link me if can ^^^ https://www.metalsucks.net/2022/07/25/watch-the-faceless-michael-keene-goes-on-incoherent-onstage-rant-starts-headlining-set-two-hours-late/

That's playing Russian roulette with your finances. What's his name will pull out of the tour or cancel many dates random when he's too strung out or jonesing to perform.

Thanks for the link WOW Inexcusable Get help, you had your prime. Or maybe get strung out at least AFTER the show.

As long as they don't share needles, let the kids have fun

I can't really throw shade because planetary duality is a banger and he was really cool to my nephew way back. My nephew is insanely good at guitar and drums and Michael was nice enough to give him some tips. That being said, get your shit together, go to detox, right some decent riffs and be an adult. Stop letting your fans down.

Did anyone tell him he can get heroin on the streets for a lot less effort?

Some people might think drugs have turned Keene into an asshole. That's not true. He was an asshole before drugs too.

He shoulda gone to TLTSOL. Heard they had some openings

Planetary Duality is so good that all mistakes are forgiven.

Sage looks like the cowardly Lion,-from the Wizard of Oz.

Band hasn't been good since Akeldama. You're an absolute f*cking Neanderthal to discount planetary duality. THAT was the last noteworthy release. Rip to this new dudes "career"