Featuring interviews with a plethora of death metal stalwarts 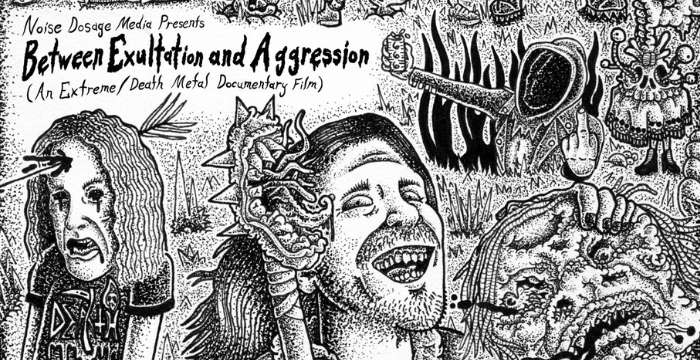 If you've got a few hours to kill this weekend, and you haven't seen it already, might we suggest sitting down with the comprehensive death metal documentary "Between Exultation and Aggression" directed by Jon Lambert (Noise Dosage Media) released just last week.

advertisement
The film features no music or performances besides b-roll, but what it does provide is exhaustive interviews on inspiration and tales of touring with some of the most well-known figures in the underground extreme metal scene. If you're a fan of any of these bands even just a little bit, it's worth the watch.

"We dig up some of the most terrifying and hilarious tour stories such as Matt Harvey (Exhumed/Gruesome) getting stuck overseas in prison over a bullet belt without an English-speaking translator, Tony Foresta's (Municipal Waste) experience with being stuck in a bind with a bloody promoter, Chris Monroy's (Skeletal Remains) tiring mission to find his intoxicated drummer at a festival after sharing a hefty bottle of Jack Daniel's, and Adam Roethlisberger (Vitriol) waking up to his frantic band members being held up at gunpoint at a truck stop on tour over pennies."