The band's new video for 'What Is Delicious? Who Swarms?' is online now. 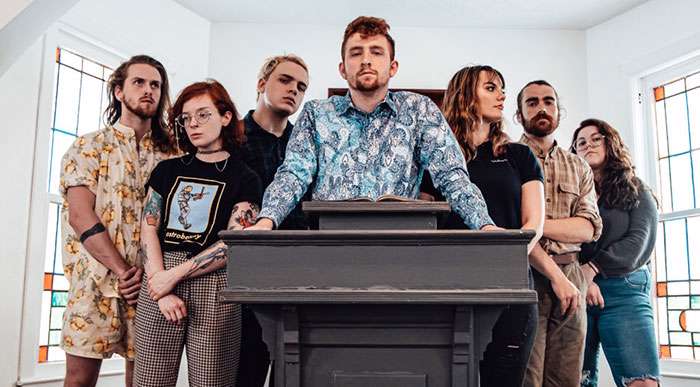 Comprised of charismatic frontman Carson Pace, possessed like a young Mike Patton, fretboard abusing guitarists Maddie Caffrey and Dan Hodsdon, frantic bassist Jack Buckalew, destructive drummer Sam Williamson, and spirited violinist Amber Christman, The Callous Daoboys revive noise rock like they're summoning the dead. The recklessly free-spirited collective deliver a vibrant combination of mathcore, sasscore, and post-hardcore -- a sound that is at once abrasive, chaotic, and classy. Reveling in high-strung extremity their music is dense, impenetrable, and chaotic yet confusingly inviting as each song deliriously swerves across stylistic lines.

Declares Pace, "Celebrity Therapist speaks to sense for the senseless. Who guards the blind, and who leads? What do we have, if not foresight? Misattribute these lyrics. We're all following someone's voice. But listen, the world ended again today. We brought you flowers, and something new.

"We're excited to share our new home with MNRK Heavy, amongst an incredible roster of artists," Pace continues. "This record is the result of our most emotional process to date, and every member threw their life into its creation. We're grateful to enable that risk with every step."

Every band claims to combine the most devastating of heavy riffs with the catchiest of melodies, but this crew does precisely that with a wrecking ball of unrestrained frenzy and total mayhem. The Callous Daoboys comes from the school of The Dillinger Escape Plan, Every Time I Die, and The Chariot, with a heightened degree of theatricality as one of the methods to their madness. Think Panic! At The Disco and Fall Out Boy getting slapped around good-naturedly by Glassjaw. Celebrity Therapist even indulges in a bit of drone and avant-garde post-rock a la Sigor Rós and Radiohead.

Lyrically, contemplation and self-awareness run throughout Celebrity Therapist. "The whole album is about history repeating itself and how we kind of move in circles," the singer notes. "It's two steps forward and three steps back with a bunch of people in my life. The album is me reflecting on these people but realizing I'm guilty of the same at the end of the record. There are a lot of 'fuck you' songs because every heavy band likes writing those. But overall, the lyrics are more introspective and quite loving."

In advance of the record's release, The Callous Daoboys today unveil a video for "What Is Delicious? Who Swarms?," now playing at Revolver.

Comments Pace, "You can't spot an angel-in-disguise, but you won't refuse her. You've got a quick draw. The dust piles higher by the day/where you avert your eyes."

Watch The Callous Daoboys' "What Is Delicious? Who Swarms?" video at this location:

Celebrity Therapist will be released on CD, LP, cassette, and digital formats.