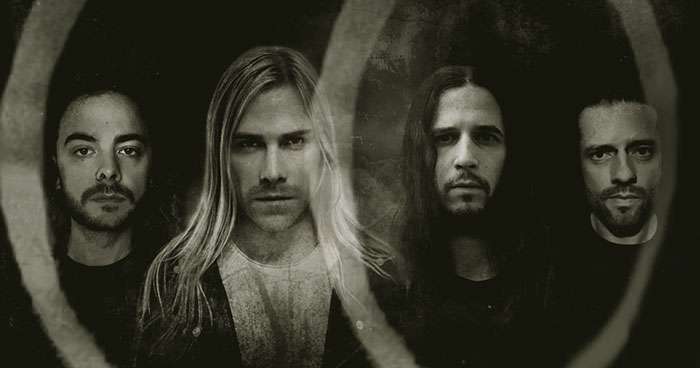 An early preview is available now, with the band sharing a teaser for their first single "Set Me Free." The track will be released soon.

It was fall 2019 when guitarist and band founder Job Bos (Satyricon, Dark Fortress, The Ruins of Beverast), approached longtime friend and drummer Norman Lonhard (ex-Triptykon) with the idea of creating music together. After having worked with different musicians, they found bass player Max Blok, who proved to be the right fit for the band on both a musical and a personal level. The final person to join the band was Icelandic singer Einar Vilberg. Einar showed that his mind-blowing vocal skills and range were the number one choice for the band and together they created a mammoth of an album. Dead Eyed Creek was born!

Dead Eyed Creek's music builds on a shared love of '90s rock sounds and heavy music. The band strives to go against the grain and eschews the clean and overproduced sounds found in the current scene. Job Bos says of the songwriting "I've been digging deep into myself, my past, my mistakes, my good and bad sides. The idea was to create something based on pure and real things, things that a lot of people have to face in life, and I hope people find a piece of themselves in our music and can hold on to it. Just like many bands have done for us. No metaphors or hiding, it's all real and it's all there."

Co-producer V. Santura adds: "I think that Dead Eyed Creek is a motherfucking great band, seriously. As a close friend of the band, I already witnessed their first steps and also the sometimes depressing difficulties and problems on the road to complete this debut album. But I have to say that I am truly stoked about their music! May the future belong to them."

Dead Eyed Creek's sound has it all - from heavy riffs and monstrous grooves to tragic and beautiful ballads and everything in between. Captivating and catchy songs with vocals that can make your skin crawl. With their music, they take the greatness of '90s rock to a new level, but most of all continue the sound from that era that so many have fallen in love with.

Now Dead Eyed Creek are gearing up to release their debut album. The international four piece already recorded eleven songs with German producer Michael Zech at Q7 studios in Munich and crafted something wonderfully iconoclastic. To top it off, the acclaimed American music video director Matt Mahurin, who has worked with bands such as Metallica, U2, Alice In Chains and many more, teamed up with Dead Eyed Creek to help them craft their first music videos.