"You're gonna get authentic punk and hardcore from Beach Rats because we are all from the 80's." 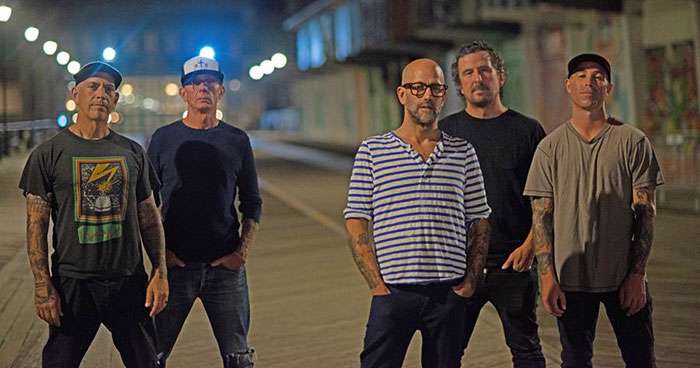 Beach Rats came to be as each member found themselves settled in the beach community of Asbury Park, New Jersey. After releasing an EP in 2018 and performing a slew of high-energy shows, the global pandemic gave the band a reason to get back to recording. The majority of the songs on Rat Beat were conceptualized and rehearsed in the basement of Brian Baker's home and then tracked by Eric Bennett at Lakehouse Studios in only one day.

Baker recalls, "We'd go down in the basement, put on masks, open the windows and we could play – within CDC guidelines! We couldn't go to dinner at each other's houses but we could practice."

The DIY spirit of punk music is very much alive in Beach Rats. With the fervor to create something new, yet nostalgic, the band intentionally wrote the 12 tracks on Rat Beat how they used to back when they were teenagers. Or as Baker puts it, "like we did before we knew how to write songs."

Not wanting to take themselves too seriously, the band formed merely over a love of the genre. These are veterans of punk rock just having fun and trying replicate that feeling and sound of what it was like to make punk music in the 80's.

"You're gonna get authentic punk and hardcore from Beach Rats because we are all from the 80's," Bryan Kienlen comments. "It's literally taking it back to some of our biggest influences like Negative Approach and Poison Idea, And of course, Minor Threat."

Keep my wife's name out yo mutha f*ckin MOUTH!

Jesus Christ hang it up grandpas

Can i earn 80k working from home tho?

That last track tittle ... I cannot take them seriously like did their 35 years old sons write that for them?

will their merch consist of adult diapers?

I can't decide if punk rock is worse when it has "something to say" or when the lyrics are "Rats, rats, we're the rats"

this song was inspired by takashi 69

Eating pizza in the video, because at their age that's a flex.

get the shot you posers

as long as that bitchy egomaniac Ian Mackaye isn't in this, i'm okay with it. dude is probably a f*ckin MKultra asset. He'll snap at one of his shows when some guy in the audience talks out of turn.

Look at these stupid ass song titles. Congratulations on living near a beach in New Jersey, I'm sure it smells like moist shit and the sand totally isn't packed with used needles. These dudes take up a whole lane with their Schwinn bikes like true 'intersectional' groomer trash.

Weezer called they went their wardrobe back

this band should be sponsored by life alert

Singer sounds like the douche from Green Day after a debilitating stroke. Who likes this, seriously…

A beach on the East Coast? Garbage

None of them are in polo's or slacks therefore they cant be taken seriously.

Why are none of the guys from HUGELY influential NJ hardcore band Deadguy in this band? Don't the scene vets in this band know they (and the entirety of hardcore and metalcore) owe their entire careers to Deadguy?

You couldn't go to each other's houses for dinner? WTF? Of course you could have. You chose not to because: the establishment told you so. And you consider yourselves punk? When you were teens and the government told you to do things, did you do them too? I highly doubt it. Sounds like your not very punk anymore and are not thinking for yourselves. Either that or you are believing the hype and they have you afraid, very afraid, of f*cking fresh air. And you admit you put on masks in a basement where no one cares what you're doing, because you again must've been afraid or overly cautious. So sad to see people clinging to a "side" (political party) and no longer thinking outside the box, thinking for themselves, and telling the system to go f*ck itself. Bizarro world has people backing the system they claim to be rebelling against. Up is down and wrong is right. Stop that train, I want to get off. You can have your subliminal OBEY OBEY OBEY all you want. I'll stick with the OI OI OI.

This is a pandemic of the unvaccinated.

Kid Dynamite already did this…..

So punk that masks are mandatory at the shows.

Bunch of no username having cowards in these comments.

LOL. Somebody mad they didnt get to suck my dick at the Turnstile show

Which band are you in that I made fun of?

lmao at vodkaveins always acting like he's some tough guy and then goes to Turnstile shows.

Remember when Trump tried to steal the 2020 election and failed and has been on suicide watch just like all his little cult followers ever since? I remember.

Do you meant "shit the pit" because that's what we do at them Turnstile gigs...

I like brian baker but yall are right. Dumb song title. Press release bragged of how punk they are while also showing no balls. Negative balls actual.

Yo these guys are heckin boosted!! Pfizer for life

Do they have registered usernames on lambgoat though?

Since when did Ari Katz like hardcore again? Hey Ari remember when you & Lifetime sold out to be the next Fall Out Boy & failed to be that? I do. Hey Brian Baker remember when you sold out with Junkyard then crawled to join Bad Religion after Junkyard flopped & Ian MacKaye said no to Minor Threat? I do. So 80s hardcore so what when you wanted NOTHING to do with hardcore 1990-2020? Do your midlife crisis somewhere else? Michael Stipe looking MFs. Shavenheads cuz bald/ing.

Danny Diablo aka Lord Ezec raised more money for his sick pitbull than he made on his disastrous Skar Head U.S. tour - dude raised almost 8.4K...for care which probably cost half that tops. A scamster so low he's using his dog to make money. All these NYHC dudes. What a coincidence that he played to less than 30 paid people a night for 3-4 weeks & BOOM! Over 8.4K for his dog. Scambag. How 'bout a GoFundMe for the child support you owe Deadbeat Dadablo? Also what's with GoFundMes where the money raised exceeds the goal? You raised the 8K now end the campaign.

Since when did Ari Katz like hardcore again? Hey Ari remember when you & Lifetime sold out to be the next Fall Out Boy & failed to be that? I do. Hey Brian Baker remember when you sold out with Junkyard then crawled to join Bad Religion after Junkyard flopped & Ian MacKaye said no to Minor Threat? I do. So 80s hardcore so what when you wanted NOTHING to do with hardcore 1990-2020? Do your midlife crisis somewhere else? Michael Stipe looking MFs. Shavenheads cuz bald/ing. Winner. Hopefully the band reads this

Moby is stoked for this

My dad dated all of these guys

Toby morse and Travis barker will pay for dinner when these 69 year old trend hoppers come to la. Also f*ck Toby. Nastyy is the best b9 poster

Lifetime sucked, The Bouncing Souls blew, Bad Religion was annoying, Minor Threat was boring, and this band is garbage

Let it Burn is terrible as well, almost forgot to mention them because they're too insignificant

Lifetime sucked AGREED, DICKS TOO, The Bouncing Souls blew DEFINTELY, Bad Religion was annoying NAH SEE BELOW, Minor Threat was boring OVERRATED BUT NOT BORING, and this band is garbage AGREED Bad Religion first LP, Suffer & No Control are great. They've been around 25 years longer than they should've been.

beach rats and berthold city should do a nursing home tour with their tired ass bands.

First LP, suffer and no control are great but baker joined after that era

Minor threat was not boring. Or overrated. They peaced out hard and the Shit has shelf life

First LP, suffer and no control are great but baker joined after that era >>> Right. So? Thank god he wasn't part of that era. I don't even consider him a member of BR, he's a hired gun.

it's disturbing that in a time of a global worldwide pandemic these guys think it's ok to even get together to play "music", if it can even be called that. they should broke up until the covid pandemic has been defeated