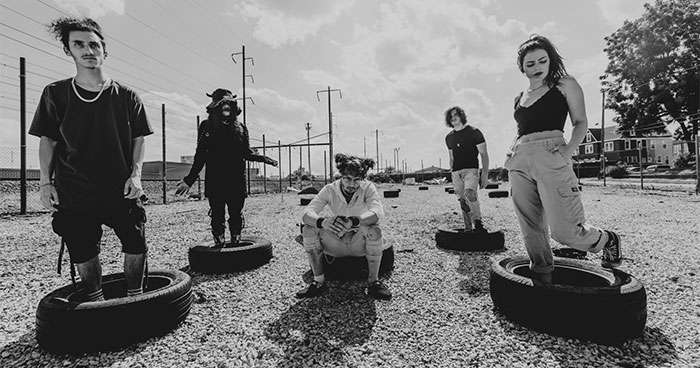 Nu-Core quintet Tallah, one of modern metal's most explosive and unbridled forces, have announced their sophomore full-length album, The Generation of Danger, today. The album will be released on September 9th, via Earache Records and much like their debut album, will revolve around around an elaborate and horrific story, dreamt up by the band that will unfold over the coming months in the build up to release. Pre-orders are available now.

To further push the world-building boundaries the band are known for, Tallah have also released a desktop video that accompanies today's announcement. Fans can play to uncover aspects of the dark The Generation of Danger universe including the first new single "Telescope" and its accompanying music video that was also released today. Watch the video here:

Speaking on today's announcement, Tallah frontman, Justin Bonitz shares: "'The Generation Of Danger' is a completely new and fresh concept for us, both lyrically and instrumentally. We wanted to take what made 'Matriphagy' so good and jack it up to 150%. The tracks are monstrous, daunting, and the story the music tells dives into the idea of people hiding what they truly desire until someone else comes along and forces it to surface. It's a concept album about a genius scientist who gets fed up with being swept under the rug. After the multi-billion-dollar corporation that employs him takes credit for his latest, award-winning invention, he snaps and retaliates against them by forcing them to take part in the greatest experiment the world of science has ever seen."

Drummer, Max Portnoy adds: "Telescope is one of fastest and most chaotic songs on The Generation Of Danger. It was the first song I started working on for the record and it went through hundreds of changes. It’s one of my top picks from the album with the song having 2 different choruses. One being a melodic one and one with a more rap type of vibe. The song has a lot to offer."

"The TGOD game was something I’ve been wanting to do since we started thinking of unique ways to present this album. It was an idea I hadn’t seen anyone do before and it’s the perfect way of setting up the album’s concept while offering loads of easter eggs and teasers. You’re essentially placed directly into the story and I feel it’s the most immersive thing we’ve ever done. I’m super proud of how it turned out."

As with Tallah's debut full-length, Matriphagy, The Generation Of Danger offers fans more than just an album of pioneering nu-core metal. Whilst it will most certainly be lauded for Justin Bonitz's acclaimed aptitude for embodying numerous characters and emotions in his outstanding vocal shape-shifting and ability to meld the ever-blossoming ingenuity of Tallah's intrepid musicians, The Generation Of Danger will reward those who delve deeper into the album and its supplementary content. The album was recorded once more with producer Josh Schroeder at Random Awesome Studio and continues to build the fascinatingly dark nu-core metal beast Tallah have created and set loose.

The Generation Of Danger track listing:

This is some Wesley type of music

i can respect josh for the hustle, but woooo boy. earache is right.

the bigger news here is that "Nu-Core" is being used in sentences.

Holy cow….. long winded statement about pushing creative boundaries. Then they splatter neon paint on their tits and turn on a black light. Drumming is gud tho

Tour with code orange and vended or whatever to follow

Drums are almost a copy of joey Jordison, which is frankly awesome. Musically it's just a bad version of slapnuts

Portnoy is a good drummer but this band sucks. Nice that he got his girlfriend in the band to be their other guitarist.

Confirmed no one in this comment section is a human being or capable of enjoyment: f*ck all of you.

This sounds like One Minute Silence. They were a nu-metal band from London.

Digby from Earache here. We're gonna be bringing back our mid 90's logo on this album so that we can trigger the death metal losers that want us to go back to the way things were. Blood Incantation and Gatecreeper are still bollocks!

Can't stand the singer. Look up his Youtube if you want second hand cringe. bleh

Yes this is dope

"confirmed band member who can't take the heat… this is an early nominee for worst output in 2022" Exactly. Bitch boy was hurt by the fact people aren't stupid enough to listen to this rehashed shit.

"Can't stand the singer. Look up his Youtube if you want second hand cringe. bleh" Like that cover of Laid to Rest? Indeed, super cringe. A real narcissist

This band would be kind of cool with a different singer.

^^ The worst part of the other band Max drums for is their lead singer too.

Lol that there are actually people who think nu-metal is/was worth reviving. Clown music for attention-seeking morons.

^^ Part of the problem is industry/media/dumb fans who never went deeper will call anything that's 10% nu-metal evidence of a 'nu-metal revival!' They've been trying to force it the last several years.

Spent more time reading that self-indulgent press release than I could make it through listening to the song...I'm sorry but this ain't it, there's a reason why nu-metal died

This is the most cringe shit I've read and heard all year. Jesus Christ, what an abomination. This singer and Jamie Morgan should f*ck each other's soggy egos to death.

Mike Portnoy is a chode so that makes his kid a chode jr. Wont listen to this band strictly because of that.

This is like Mindless Self Indulgence for even bigger retards.

This is some Wesley type of music ^what does it mean tho?

I mean, you get paid to post this stuff, yeah? That's your only excuse.

The singer dances like the chick from the Ting Tings.

That song was f*cking fantastic. Literally gave me goosebumps with that first "breakdown". Only problem was the song was too short!!! I want more