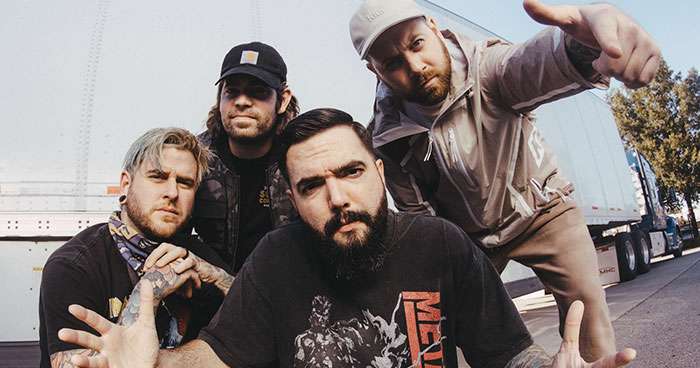 A Day To Remember have revealed a brand new version of their single "Re-Entry" featuring Mark Hoppus of Blink-182. It is available now on all streaming platforms. It notably marks their first studio collaboration together.

Reupping and recharging "Re-Entry," the Blink-182 legend lends his instantly recognizable voice to the second verse. Together, they unite eras of pop punk and deliver a resounding arena-ready anthem in the process.

About "Re-Entry," A Day To Remember vocalist Jeremy McKinnon commented, "When this song originally took shape it was without a doubt massively influenced by Blink-182, so when the idea came up to do a remix of sorts for it, Mark was immediately who we pictured. We sent him the track with no second verse and said to do whatever he was inspired to do and what he sent back genuinely makes the song for me. My younger self still can't believe it exists."

The band's latest album You're Welcome is available now on all streaming platforms.

A song to forget

30 year olds singing about life in high school are stoked

Hey guys. Tom Delonge here. I'm typing this from my spaceship. Tom has informed me he will be trying out for Every Time I Die. Travis will be filling in on drums, cause f*ck it why not add another ex-drummer to their list. Anyhow... Please purchase Box Car Racer's debut CD, they are taking up valuable space in my cargo hold....rocket fuel ain't cheap. Peace out earthlings.

is the rapey guy still in the band?

The inaugural Self Help Fest was an idea that vocalist Jeremy McKinnon came up with while talking with his girlfriend. "She told me that most people who come [to our shows] respond like it's more than just a concert to them... It's like the music is genuinely helping them. Thus we titled our festival Self Help, because at the end of the day, that's what music's all about.

The pedo/isanyoneup bass player killed someone in his Tesla https://loudwire.com/deadly-2017-crash-a-day-to-remember-bassist-josh-woodard/

Did the editor forget to include Mark's thoughts on ETID?

Nick Hoppus here, I was reading about this ETID thing on CNN. I never heard of them but I do like that Butcher guy on AEW. It's not real wrestling, but it's fun. I think I am on Keith's side. That guy has some good ideas.

Nate newton here, bass player from Converge and Old Man Gloom, the guys in the band call me Fig.

these guys are older than 30

these dudes haven't aged well. remember when the one dude from this band awkwardly proposed to his wwe diva girlfriend on her tv show and she did not want it hahahahahahahaha

Marty from Zao here. This band has never asked us to tour.

anonymous 24 minutes ago The pedo/isanyoneup bass player killed someone in his Tesla https://loudwire.com/deadly-2017-crash-a-day-to-remember-bassist-josh-woodard/ i hadnt heard about that. what a f*cking piece of shit

Did the diddler/drunk driver/vehicular manslaughter guy play on this track? Is he vaccinated?

Pointing at cameras is cool. Therefore, I can only infer that these fellows are, in fact, cool guys.

i hate this. dammit.

You losers have lambgoat PROFILES? Definition of pure retardation. I am praying for you "EvIL HERo" LOL

That guy in the top right corner with the finger gun is tough.

Best band of the past 20 years in our scene

A cling to Relevancy

Yea but are they boosted and do they wear N95s??

We Were Young Fest anthem.

I'm being serious here. Has anyone seen this finn mckinty dude at a show? I understand he's making money, Adam 22 blah blah we're jealous but this dude is the worst

Finn is doing a good thing. We are bordering on boomer status and he's preventing that with the cheesy videos that the kids watch


Tags: A Day To Remember