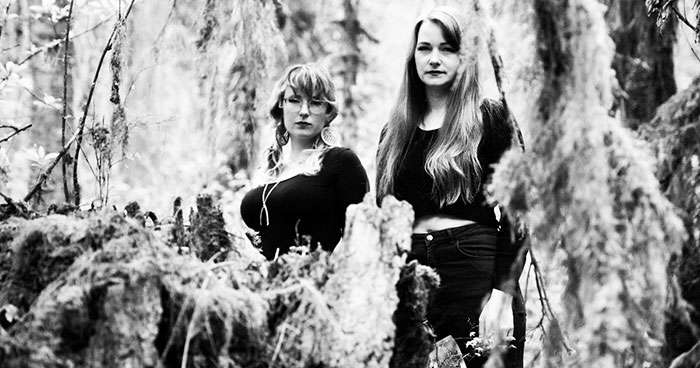 Portland dark rock duo Hoaxed sign to Relapse Records. Hoaxed first unveiled their self-titled debut EP at the beginning of 2021 and will release their debut full-length album in 2022. Stay tuned for more information in the near future.

Watch the "Candle Master" music video from their self-titled EP at this location:

Like all the greatest revelations, Hoaxed have emerged, seemingly from nowhere: an idiosyncratic and enigmatic two-woman force. With a sound that defies traditional description, vocalist/guitarist Kat Keo and percussive powerhouse Kim Coffel have used their lockdown months as a golden opportunity to pursue their true creative desires, instigating something exhilarating, new and brilliantly creepy in the process.

First unveiled on their self-titled debut EP at the beginning of 2021, Hoaxed appear to exist in a sonic world entirely of their own design. With musical references as disparate as crunchy modern metal, ghoulish gothic rock, twanging Americana and shimmering shoegaze, songs like the menacing melodrama of Dark Altar Magic and the windswept ‘n' ghostly drone rock grit of Candle Master ooze shadowy charisma and disarming originality.

Once again, observe the power of two. As Kat Keo's ethereal melodies and spiky poetry provide a mesmerizing focal point, Kim Coffel's thunderous grooves and turbocharged pulse provide the muscle, spine and beating heart of Hoaxed. Fundamental to the band's gleeful dismantling of traditional genre boundaries, Kim's metallic attack and precision ensure that even the more elegant parts of songs like Riders and Cold River connect with jaw-juddering impact.

Having selected a suitably beguiling and sinister name ("It struck me that people love a magic trick," says Kim. "But if you put that in a darker setting, it becomes something from the heart of evil. It's malevolent."), Hoaxed have made it plain that they have a natural instinct for the dark side of music and its attendant culture. Fittingly, there is something wonderfully subversive about the way the duo's insidious hymns to nefarious spirits so effortlessly straddle multiple genres. Newly signed with the eternally open-minded Relapse Records, Hoaxed have conjured something with self-evident cult potential.

As the dust settles and the clouds disperse, Hoaxed are preparing their first full-length album and a full-scale assault on hearts and minds. Meanwhile, the spell has been officially cast. This is heavy music for heavy times, but with a lightness of touch and ferocious intelligence that sets Hoaxed apart from just about every other band out there right now. That, in itself, is some kind of dark magic.