Metropolitan Police Department of the District of Colombia are apparently seeking some of the people photographed during the riot at the Capitol building yesterday for "unrest-related offenses." That would seemingly include Iced Earth mastermind Jon Schaffer, who was allegedly featured in a photograph capturing a portion of the melee. The Department has distributed a slide show with a series of photographs of individuals they'd like to identify. Among the slides is the purported photo of Schaffer, whom the Department accuse of "unlawful entry." You can have a look at the slide in question below. The police are offering a reward of up to $1,000 to anyone who provides information leading to the arrest and indictment of any of the individuals they accuse of illegal activity. 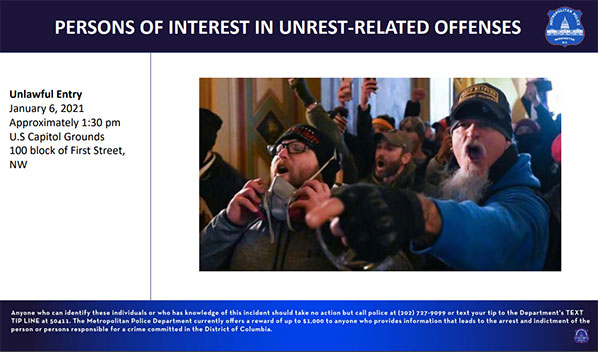 [via via Metal Injection]