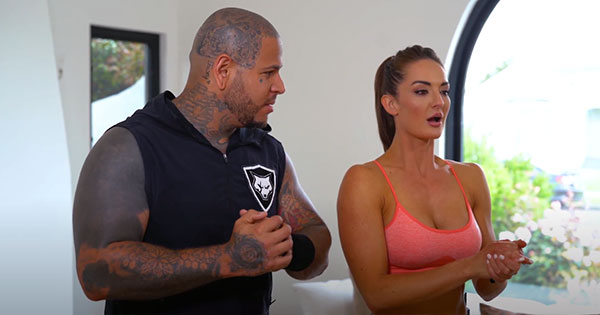 Bad Wolves vocalist Tommy Vext has allegedly been accused of assaulting his one-time girlfriend, Whitney Johns. A fitness model and trainer, Johns has sizable followings on both Instagram and Facebook (the image above is from an Omax Health promotional video in which both Johns and Vext appeared). MetalSucks purport to have obtained a series of Superior Court of California documents in which Johns, age 30, claims that Vext, 38, assaulted her several times both during and after their relationship. Four alleged assaults took place in January, February and April of 2020. According to MetalSucks, she alleges that Vext "hit her in the face with enough force to draw blood, dragged her by the hair, and put her in a chokehold for a sufficient amount of time that she nearly lost consciousness, among other accusations." Johns further alleges Vext threatened her life multiple times and "knows where I live and I am terrified for my life," prompting her to seek a Domestic Violence Restraining Order against Vext on April 17. Johns' request was granted in part, with Vext ordered to neither contact nor come within 100 yards of her. You can read further details here. MetalSucks reports that the next hearing in the case is slated for tomorrow, December 9. This isn't the first accusation of violent behavior from Vext (real name Thomas Cummings). In 2008, the wife of Fear Factory guitarist Dino Cazares said that she and her husband were attacked by Vext at a metal concert. The alleged incident occurred several months after Vext was fired from Divine Heresy for purportedly losing his temper during one of the band's shows.