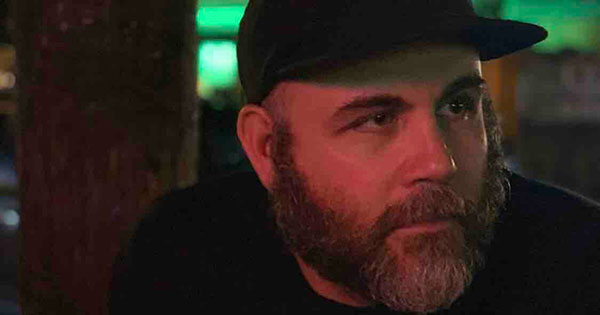 Peter Kowalsky, vocalist of Florida bands Ether Coven and Remembering Never (in addition to Until The End, xBishopx, and more), has been diagnosed with stage 3 colon cancer. To help offset his mounting medical bills, a friend has launched (against Kowalsky's will, since "he wouldn't want to ask anyone for any type of help") a GoFundMe campaign. Campaign organizer Erika Hughes provided this account of Kowalsky's ordeal:
On December 26th, Pete went to the ER because he was having pain in the lower right side of his abdomen on and off since mid November. He had gone to a doctor earlier that week and was told that he had appendicitis, but it had not yet burst. He waited until after Christmas, and then returned to the hospital without insurance. They then did a CT scan that revealed it had burst, so he was admitted for an appendectomy. Since it had burst, it was a messy surgery. His abdomen was full of infection and and mucous. It took 5 days in the hospital to get his white blood cell count to normal. A week after returning home, Pete received a call from the surgeon stating that the pathology report came back that showed his appendix tested positive for cancer, Adenocarcinoma. The oncologist reviewed the report, and advised Pete to schedule another surgery as soon as possible, since the cancer in his appendix may have spread throughout his body and since he was given an official diagnosis of colon cancer. His colonoscopy after the appendectomy came back immaculate, which gave us hope that the cancer did not spread. However, after talking to the surgeon, we found that he has true appendix cancer, which is far more aggressive than colon cancer, and very rare. Last Tuesday, he was admitted for surgery to check his lymph nodes and clean out anything that might have been left behind from his appendectomy. During surgery, another tumor was found pressed against his bowels, which required removal of half of his small intestine and part of his colon. They advised him that there was an enormous amount of cancer found in his body, and labeled him as having Stage 3 Colon cancer. In two weeks, Pete will start chemotherapy. Both intravenously and through pill form to try to kill microscopic cancer cells that could not be removed, as well as a small mass that was found on his lung that hasn't been tested yet. We are hoping that with treatment, he will be completely cancer free. They gave him a 40% chance of the cancer returning. Pete was advised to stay on bed rest for 3 weeks following this surgery. Anyone that knows him, knows that he can't stop, won't stop. We started this fundraiser against his will, since we knew he wouldn't want to ask anyone for any type of help. The facts are that his insurance doesn't kick in for another month, so he's going to have crazy medical bills from multiple surgeries. He also needs time off of work while he's going though chemo, whether he believes it or not, and his bills still have to get paid through this tough time. I am going to link the funds directly to him. Pete is our family for life, and we would do just about anything to make sure he's ok and taken care of. Im asking for donations to allow him to relax and recover on his journey to cancer-free. Thank you to every donor!
Last year, we happily spent two hours chatting with Kowalsky for the Lambgoat podcast. You can revisit our discussion below.