Official press release: Stoner death metal icons Cannabis Corpse will release 'Nug So Vile' on November 1 via Season of Mist. The album was mixed and mastered at Blaze of Torment Studio by Jarrett Pritchard. The artwork, which was created by Par Olofsson, and track-listing have been revealed and can be viewed below. In conjunction with this announcement, Cannabis Corpse have partnered with Dread Central to premiere the gory, animated music video for the first single, "Cylinders of Madness." The video, which was created entirely by Cannabis Corpse drummer Josh "Hallhammer" Hall, can be seen and heard at this location. Cannabis Corpse vocalist/bassist Phil "Landphil" Hall comments on the clip: "My brother Hallhammer and I are excited to premiere the animated video for 'Cylinders of Madness!' This video is Hallhammer's very first foray into animation and marks the starting point for a lot of amazing content in the future. This medium opens up a whole new world of possibilities for insane content for Cannabis Corpse! Stay tuned!" Nug So Vile track listing: 01. Conquerors of Chronageddon 02. Nug So Vile 03. Blunt Force Domain 04. Cylinders of Madness 05. Blasphemy Made Hash 06. Cheeba Jigsore Quandary 07. Edibles Autopsy 08. Dawn of Weed Possession 09. The Cone is Red (Long Live the Cone) 10. The Ultimate Indicantation 11. From Enslavement to Hydrobliteration (bonus track) 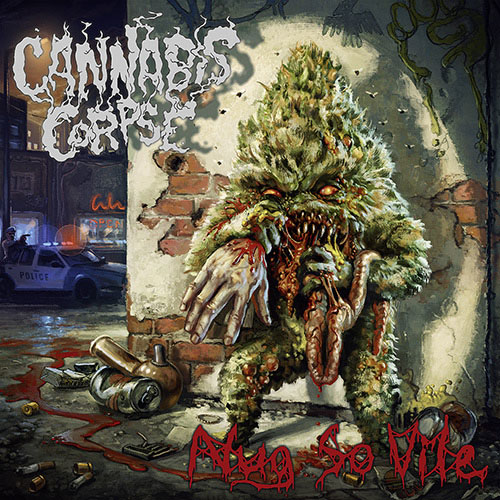