As I Lay Dying to reportedly release new album in September

Tue, July 16, 2019 9:01 AM PT6,091 views
If a since-deleted pre-order listing (see image below) is to be believed, reactivated metalcore band As I Lay Dying will release their first new album since 2012 this September. To those of you who saw yesterday's news regarding As I Lay Dying's fall tour, it should come as no suprise that the new record will be titled Shaped By Fire. The album will supposedly be released on September 20 via Nuclear Blast Records and its purported track listing is below. Shaped By Fire track listing: 01. Burn To Emerge 02. Blinded 03. Shaped By Fire 04. Undertow 05. Torn Between 06. Gatekeeper 07. The Wreckage 08. My Own Grave 09. Take What's Left 10. Redefined 11. Only After We've Fallen 12. The Toll It Takes 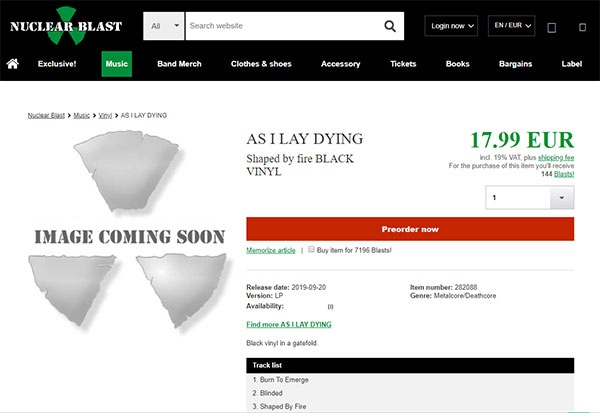