Official press release: Get ready to swill on command on Friday and Saturday, December 13-14, 2019, as Decibel, North America's only monthly metal magazine, brings the loudest, heaviest, most extreme craft beer festival to the Observatory in Santa Ana, California. Rare appearances confirmed include death metal progenitors Possessed, recently reunited thrash metal heroes Vio-lence and grinding death machine Nails. Both Norwegian death metal legends Cadaver and Swiss black metal progressives Schammasch will make their U.S. debut performances at Metal & Beer Fest, while east coast doom metal kings Evoken will perform for the first time ever in California. Classic metal-inspired quartet Spirit Adrift, Utah power metal warriors Visigoth, Arizona death dealers Gatecreeper, cinematic grind-crushers Graf Orlock and death/doom new jacks Mortuous round out the first wave of bands on the bill with another headliner and more major acts to be announced in August. Not to be outdone by the bands, the country's most metal breweries will converge in a maelstrom of malt madness! Three Floyds (IN), Burial (NC), Wake (IL), Hoof Hearted (OH), Stone (CA) and Three Weavers (CA) comprise the first round of breweries on hand to pour, with many more to be announced in mid-July. Special discounted early-bird weekend "Metal & Beer" tickets, which include samples from all breweries all weekend long, will be on sale at 10 AM PST this Friday, June 21st at this location. Evil warriors of Los Angeles unite. 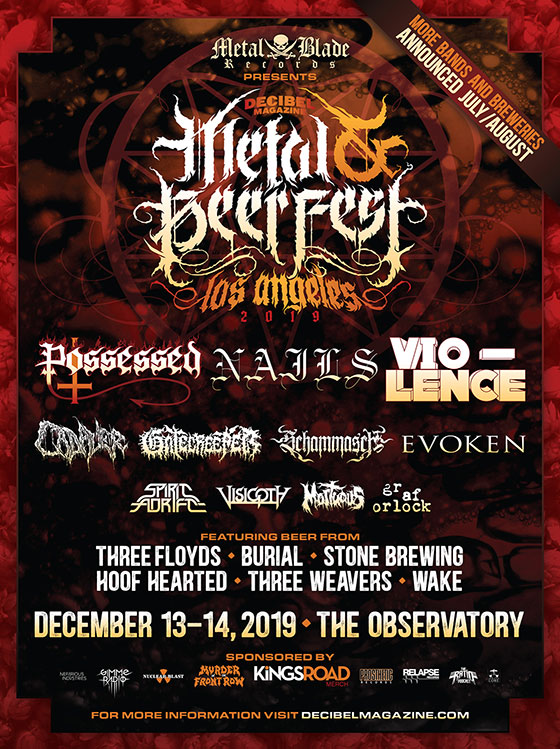 too many layers of sh*t to break down on this one. makes sense it would be in Ca

Ha! Someone was able to get EJ at prosthetic to part ways with the $10 necessary to sponsor this?

Decibel has sadly become a joke. Every issue is just an ad for the bands they have on these "fests" of theirs. They'll cover other bands and fests, but unfavorably.

Parking situation at the observatory is fun

is there were the James Dean movie was shot?

this is the worst

If you wished they all could be California girls, you're in luck. This event will be filled to the brim with the highest levels of estrogen in men the world over.

Still really confused about the whole Saves the Day headlining TIHC 2019. STD's chris connely has always been a outspoken advocate in regards to safety at any music event. I'd really like to hear JOE HC's thoughts about booking this years TIHC.

Chris will probably be wasted

hahahahaha. oh geez. hahahah so much posturing going on here. Nails a "grinding" anything? Nope more like poster-boy act for Grindr app. Mortous? Stay in SJ you lazy turds. Other poster has it correct - only in CA would such a fashion show exist. Beer fest? isn't toddjones sXe? true 'til 21 hahha

meth and beaver > metal and beer

No truth. No trust. You will never see me at this stupid ass festival.

People who make minimum wage charging $10 for parking at The Observatory are stoked.

Anyone else read that press release in the voice of the monster truck guy? No? Just me?