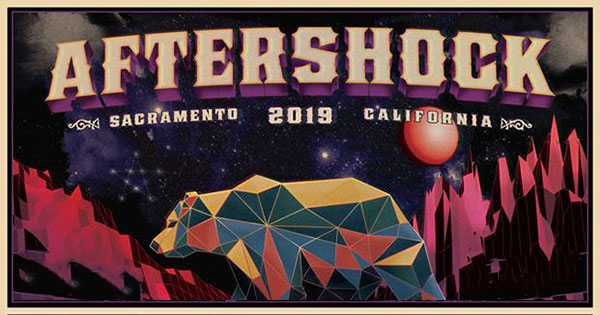 Official press release: After welcoming a sold-out crowd of 60,000 people in 2018, Aftershock returns even bigger this year, expanding to three full days of performances from some of the most popular music acts, including a mix of chart-topping headliners and up-and-coming buzzworthy bands across the rock spectrum. The eighth annual edition of California's biggest rock festival takes place Friday, October 11, Saturday, October 12 and Sunday, October 13 at Discovery Park near downtown Sacramento, CA, and is produced by premier independent festival producer Danny Wimmer Presents. The lineup features Tool, Slipknot, blink-182, Korn, Rob Zombie and the return of Staind after a five-year hiatus. Additional acts include Bring Me The Horizon, A Day To Remember, Marilyn Manson, Lamb of God, Halestorm, Dropkick Murphys, Babymetal, Bad Religion, Stone Temple Pilots, and many more. Korn's Brian "Head" Welch says, "Aftershock Festival is always a unique experience for Korn compared to other festivals. One of the main reasons is we have many friends and family that live near Sacto, so it's always like a family reunion when we play Aftershock. We've been gone a while and we're coming back this year with a new album, new stage look, and a new excitement that is very contagious! We feel like we are on fire right now and our fans are gonna be fuel for the flames!" VIP and general admission tickets, as well as hotel packages, for Aftershock will be available beginning on Friday, April 26 at 12:00 PM PT. Visit www.AftershockFestival.com for more details. The current music lineup for Aftershock is as follows (subject to change): Friday, October 11th: Slipknot Staind Lamb Of God Halestorm Dropkick Murphys Clutch I Prevail Beartooth Motionless In White Andrew W.K. Philip H. Anselmo & The Illegals Knocked Loose Angel Du$t While She Sleeps DED The Pink Slips Santa Cruz Saturday, October 12th: Blink-182 Rob Zombie Bring Me The Horizon Marilyn Manson Stone Temple Pilots Bad Religion Highly Suspect Ghostemane Fidlar The Interrupters Fishbone Badflower Ho99o9 Health Parlor Mob Sick Puppies Spirit Adrift Broken Hands Dead Posey Sunday, October 13th: Tool Korn A Day To Remember Chevelle Babymetal Gojira Architects Falling In Reverse Deadland Ritual Fu Manchu The Crystal Method Frank Carter & The Rattlesnakes The Hu Fire From The Gods Joyous Wolf Evan Konrad Brkn Love Blue Midnight

clutch and Ca. two worst things in the US

Look at Clutch right up there towards the top of the bill, sharing the stage with juggernauts like Slipknot and Staind. I don't see AILD up there.

There won't be any portable toilets at this festival because people in California just shit on the sidewalk anyway. Let's save the money.

Because people from California think their shit don't stink. Some of the worst people on planet earth.

as evidenced by the low life's here backing Ca lately. enjoy living in your walk in closet with 3 roommates for 1,800 each a month

suck that clutch I live in California and yes it sucks

California: the state where the only career option is gangbanging.

"Because you run your business so poorly, your jerk of a governor is going to allow offshore oil drilling. Say goodbye to the beaches! You deserve it." What's it like to know I'm probably paying for your mom's (also your lover) foodstamps?

what's it like to know you are a liberal cuck who supports a state and system that facilitates/rewards illegal immigration and homelessness burdening the entire nation.

Wall off Ca instead

California has per capita the most deadbeats in the lower 48 states. Better pay up esp if your only 5'1 and constantly lie to people and smell really bad (he really does).

What's it like to know I'm probably paying for your mom's (also your lover) foodstamps? ^^^^^ That's only federal income tax, you nimrod. California has an 18% state income tax and Sacramento squanders it on homeless drug addicts and illegal immigrants. Your idiot state wouldn't have a homeless crisis if the bureaucracy would allow new construction. Nice try at being clever but it's clearly not for you.

tantric should be on this

lol at Staind getting back together. I'm gonna go verbally abuse him from the crowd and get him to throw one of his fits and walk offstage and hopefully they never play again. Also, Fishbone rules

I live in sacramento and work at a bar near the venue. This festival attracts the worst trailer park trash, hot topic buttrocker, tech n9ne losers on earth. It literally brings down the whole city. And yes the fans do shit all over the floor because theyre too trashy and drunk to use a toilet

And you go there to get laid

I didn't find out til recently, but clutch kicks ass

fck New York and Los Angeles. Chicago is where it's at

Will go for angel du$t then leave

Hoods should be on this.

I'll be there so yes you will get laid. Meet me at the side of the stage after clutch

Fight me during Parlor Club pussies, I'll be in my sleeveless Pissgrave t-shirt.

No washed up Code Orange on this?

I live in California, Silicon Valley to be exact. I make more money than your entire family. Jealousy doesn't look good on you brah

"That's only federal income tax, you nimrod. California has an 18% state income tax" Did I say ANYTHING about state tax? "Your idiot state wouldn't have a homeless crisis if the bureaucracy would allow new construction." There's a MASSIVE construction boom in the state right now. Stop getting your info from Fox and Breitbart.

lives in a one bathroom walk in closet in sunnyvale with three other roommates. silicon valley is trash. polluted and also full of illegals/homeless permeating into the suburban neighborhoods

fck New York and Los Angeles. Chicago is where it's at ^Chicago is fcking joke of a city with the worst weather in the country. Terrible hardcore scene as well. fck off.

I wonder who will get triggered by Phil Anselmo and the Illegals! Cali is a sanctuary state right?

seems like someone is made they can't afford to live in sunnyvale.

only pussies brag that they aren't from california. broke ass flyover states

only known beta mutts get triggered over the pointing out of CA's feces covered sidewalks. biggest trash state, enjoy living in a closet (rented) with a shared gender neutral bathroom. sissy

Cali seems a good place for deadbeat dads to exist, I know a certain douchebag that could kettlebell flip his stupid face out there and thrive on getting AIDS.

"only pussies brag that they aren't from california. broke ass flyover states" Every state is a flyover state, dumbfck. Just depends where you are going.

Billings is in a flyover state this should be in Billings