Life Of Agony, Sick Of It All set for 'Two Sick Nights Of Agony'

Official press release: Two seminal New York bands emerged from the heavy music scene together in the early 90s, yet somehow have never shared the same stage until now. Life of Agony and Sick Of It All are excited to announce that they will co-headline two shows together for the first time in their 30 year history. The shows, labeled "Two Sick Nights of Agony," will take place December 14th at The Paramount (Huntington, NY) and December 15th at The Stone Pony (Asbury Park, NJ). Billy Bio, the new band featuring Billy Graziadei (Biohazard, Powerflo) will open both nights. Tickets go on sale on Friday October 5th at 9:00 AM Eastern. "One of the first vinyl's I ever bought at like 17 years old was Sick Of It All's Blood, Sweat & No Tears," says Life of Agony vocalist Mina Caputo. "It is basically one of the most prolific, timeless, and adventurous true hardcore albums ever written. Playing together for the first time in 30 years is something we always wanted to do, and something a lot of fans want to see. Just thinking about the combined energies of those two nights leaves me euphorically beside myself. Absolutely honored to share the stage with such a legendary NY band." "We have a long kinship with our friends in Life of Agony," adds Sick Of It All's Lou Koller. "I remember when Joey Z gave me their demo, and once I heard it I knew they were gonna change things up. And Life of Agony has done just that, both musically and socially, which is the very essence of the sound we both play and love! When they approached us about joining them for these shows we were excited and said yes right away! This is going to be special!" "Two Sick Nights of Agony": 12/14 Huntington, NY @ The Paramount 12/15 Asbury Park, NJ @ The Stone Pony 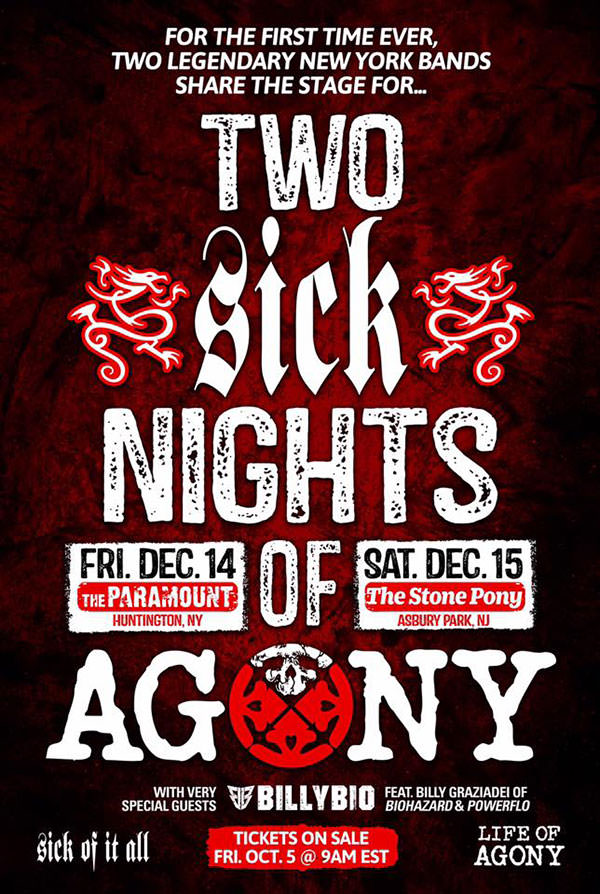 Tags: Life Of AgonySick Of It All