Every Time I Die reveal lineup for 2018 holiday show 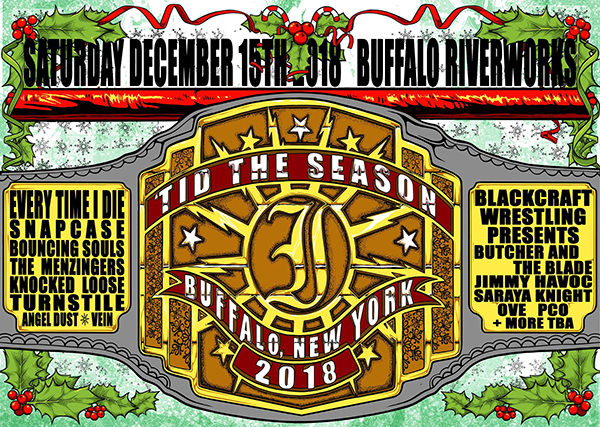 Official press release: Hardcore heroes Every Time I Die announce the lineup for their annual hometown holiday show and second installment of 'Tid The Season, December 15 in Buffalo, NY at Buffalo Waterworks. Bands performing at the one-day festival are handpicked by Every Time I Die and include Snapcase, The Bouncing Souls, The Menzingers, Knocked Loose, Turnstile, Angel Du$t, Vein, and Every Time I Die headlining the bill. Blackcraft Wrestling presents Butcher and the Blade, Jimmy Havoc, Saraya Knight, OVE PCO, and more. Every Time I Die frontman, author, and comedy writer Keith Buckley adds, "Merry Shitmas, everybody. Even The Grinch would get in the pit for this one." Tickets for 'Tid The Season are on sale now at tidtheseason.com.

this joke has gone stale.

Lol "Hardcore Heroes". TFW Menzingers is by far the best band on your "hardcore" fest

Where does it say its a hardcore fest? Lineup looks awesome!

No Sons of Abraham?

ETID has more experience, clout, and reason to be called "hardcore heroes" than just about any band that has or will play TIH or FYA or Sound & Fury..... blah blah blah........ they don't need your fckin' validation or approval. I back this band 100% and wish that Andy would come out of mosh retirement and fckING MURDER these wannabe tough guys at TIH. Y'all don't know shit bout nothin.

Who cares? Band is a clown cavalcade. Saw them and Keith Buckley was a mental midget, a mere shadow of his former self. Van kickflips forever.

I am sure they will read these comments directly before they step on stage to the sold out audience of this show. Meanwhile over in middle America, the rest of you continue digging deeper financial holes while some how blaming the people you wanna be.....for making the personal choice to never follow your own dreams and never make enough money to live a truly fulfilled life. Please continue wearing hoodies to hide your man breasts and pleasure to women who will never fck you. #blessyou

To all of those who question the validity of these bands, and have nothing but negative shit to say, I have a question for you: Dum dumdumdum dum dum JUNJUN Do you know yourself? do you know the others? Can you pull the weight that rides on another's shoulders? And once you've lost yourself to the acceptance mask, well could you find yourself? it's not a simple task. Self-inherence, freedom, comes from within. Take a different track, it's time to see what your are made of.

"Lol "Hardcore Heroes". TFW Menzingers is by far the best band on your "hardcore" fest" What are you talking about? The Menzingers are terrible.

Everyone on this show is a jabroni.

old andy was cool , new wrestling andy is corny, dude goes so far out of his way to use wrestling lingo now. Dude is getting too skinny as well

Holy shit look at all the deep try hards getting us to jump in front of the mirror to question if we wanted to play in 5 tier metalcore bands and cater to a 14-18 crowd at warp tours. Get fcked you ego maniac, you still have to return to your shopping bag filling job after this wonderful show.

"Menzingers are awful" said nobody ever..

mezingers and bouncing souls are trash. ETiD are try hards lol with the knocked loose, code orange and turnstile nonsense lately. dudes are at least 15 years their senior. went from electronicore to nu core to metallic hardcore tours to stay relevant. go back to southern country core. maybe that will be next. were at least two tiers below AiLD in 2005

would unironically drive to buffalo for this

depressed 40 year olds who obsessively watch wrestling and wish it was still 1996 are stoked.

what the fck is you goons obsession with segregating great bands into Psuedo "tiers?" D0NV1T0 0ut....