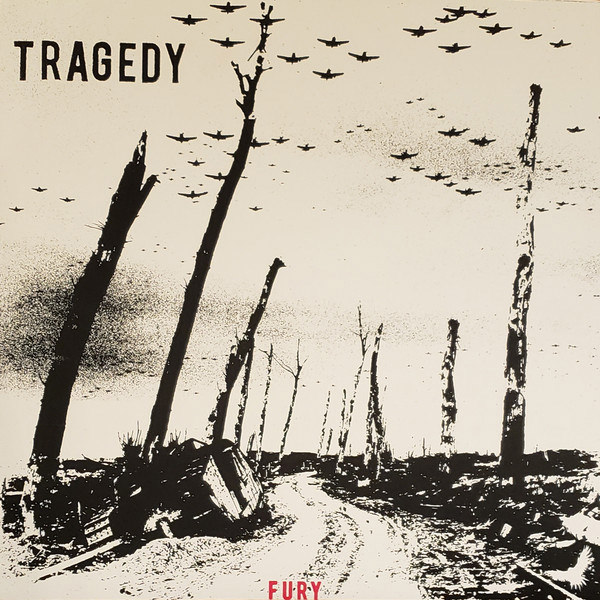 Portland, Oregon-based crust punk/hardcore band Tragedy has apparently released a new record titled Fury. The new outing features six songs and was released (on vinyl) this past Friday, August 31. Tragedy doesn't do a lot of marketing or promotion, so the fact that they've put out a new record without really telling anyone shouldn't come as any great surprise. The new release was reportedly recorded by Billy Anderson and mastered by Brad Boatright. You can check out some details here.

This is a tragedy.

^ Not a very intelligent response to something that is serious.

Watched them this past Friday, August 31 at their record release in Jerome. I really don't listen to much hardcore but my 21 year old son does so I took him. It only took this band 3 mins to have my jaw on the floor. Okay, that stick trick at 1:08 into their set took me from 6 to noon real quick. That actually bothered me more than it should...

^ stop talking pssy music, I'm sick of your shit, keep positing shit and I will IP ban you, am I clear?

Tina Hussein here. How come no one worships me on here anymore?

Awesome. Classic band. Will listen for sure.

will listen to decked out in my seattle seahawks gear

^ stop talking pssy music, I'm sick of your shit, keep positing shit and I will IP ban you, am I clear?" -F_A_G_G_O_T Why don't you eat a pile of my shit, you have no ability to ban anyone including yourself from repetitively being a douchebag.

^ stop talking pssy music, I'm sick of your shit, keep positing shit and I will IP ban you, am I clear? ^^^^^ Voted for Alexandria Ocasio-Cortez

Justin Brannan here- I voted for myself.

anonymous7 hours ago ^ stop talking pssy music, I'm sick of your shit, keep positing shit and I will IP ban you, am I clear? ^^^^^ Voted for Alexandria Ocasio-Cortez ^^^^^ like lol teehee

anonymous9 hours ago TODD JONES 2020 Immigration Policy: YOU WILL NEVER BE ONE OF US!

Colin Kaepernick here, I just saved 15% on my car insurance by switching to Geico.

Someone upload this fcking record to YouTube. That's punker than tragedy's cute attempt to make us flip through the back pages of maximum rock and roll and sending them $5 and waiting a month for them to get around to mailing the fcking record to me.

Hi. I have the new tragedy album. You can email me at st.paranex@hotmail.com. -Fatima

I'm Mike Penis. I was named after my dad's penis