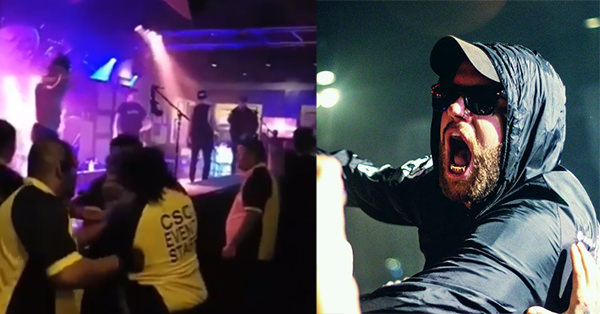 photo by Dylan Duncan
The confrontation between Attila vocalist Chris Fronzak and security officials at the band's Wednesday night show in Las Vegas might have legal consequences for Fronzak. While Fronzak contends he was protecting his fans from abusive and overzealous security guards at Hard Rock Live, the company overseeing security for the show claims that three guards were hurt at the show after members of Attila attacked them. According to News 3 in Las Vegas, Jay Purvis, an executive with Contemporary Services Corporation, said that "Fronzak sucker punched two security guards and a third guard was hit with a guitar in the back." "They were all professional in performing their duties for our client, Hard Rock," added Purvis. Meanwhile, an anonymous fan told News 3 that security guards were punishing fans for crowd surfing: "I would see them grabbing the fans. Almost like putting them in chokeholds while walking them away." While the security guards "are doing fine," their company filed a police report with the Las Vegas Metropolitan Police Department, who say that Fronzak could face a battery charge for his role in the incident. The Hard Rock released the following statement on the matter: "The safety and security of our fans, staff and performers is our top priority. We are disappointed in the escalation of events at the Attila show last night. While we believe security acted in an appropriate way to protect the best interests of guests, we are reviewing the incident to ensure proper protocol was followed."