The Devil Wears Prada, Fit For A King, '68 tour dates 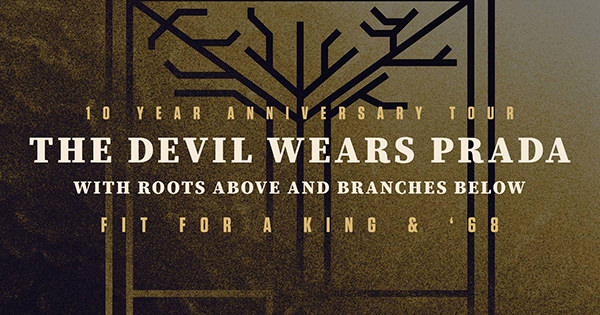 The Devil Wears Prada will celebrate the imminent tenth anniversary of their third studio album, 2009's With Roots Above and Branches Below, and will perform the record in its entirety each night. "In anticipation of 10 years of WRAABB, we'll be playing the record front to back through the end of this year," said singer Mike Hranica. "We dudes in the band appreciate record anniversary tours and and with that we wanted to offer the same. We've been looking forward to this for the last year or year-and-a-half and please enjoy." The first leg of the tour will feature Fit For A King and '68 and kicks off on September 27 in Seattle and runs through October 12 in Springfield, Missouri. The trek includes several stops in Canada, as well. Additional legs will be announced in the near future. 9/27 Seattle, WA @ El Corazon 9/28 Vancouver, BC @ Rickshaw Theatre 9/30 Edmonton, AB @ Union Hall 10/1 Calgary, AB @ The Gateway 10/3 Winnipeg, MB @ The Garrick Centre 10/4 Minneapolis, MN @ Varsity Theater 10/5 Iowa City, IA @ Blue Moose Taphouse 10/6 Milwaukee, WI @ The Rave II 10/7 Detroit, MI @ St. Andrew's Hall 10/9 Indianapolis IN @ Deluxe at Old National Centre 10/10 Cincinnati, OH @ Bogart's 10/11 Nashville, TN @ Exit Inn 10/12 Springfield, MO @ The Riff