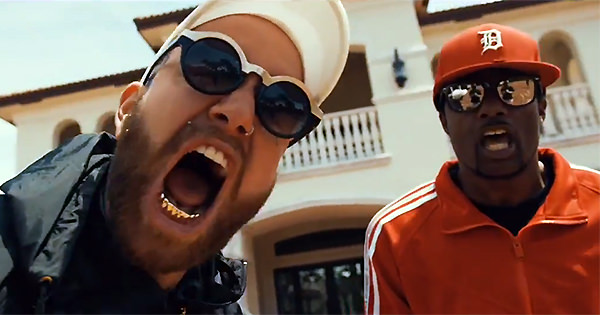 Attila vocalist Chris Fronzak has unveiled his new project with Da Boi J, dubbed Bone Crew. Their debut, self-titled EP will be available on August 3 via Fronzak's label, Stay Sick Recordings. Fronzak comments: "I've been working on this project for over a year now and it's been hard to keep it a secret. Now I'm ready for the world to hear. Say hello to Bone Crew. This is trap metal." A video for new single "Back It Up" can be found here:

He has become lost in the sauce

Thanks for nothing, Thanos.

his photo his mouth is WIDE open, so YOU KNOW,which bone he is hankering for,"Stay Sick" Poverty Pimp.

Imagine having such a lack of identity and originality, that you have to put metal on your teeth and think this sounds good. Therapy isn't as expensive as it was, whoever you are Attila frontman guy.

NOBODY asked for this

A grown child crying for attention. What an embarrassment.

I can't wait until he goes bankrupt.

why are you hating on this, it is actually decent. yah doesn't have same production value as drake but budget is much lower, got that dirty south vibe. if you don't like this i bet you are a nasty social justic e warrior. well your right this is not your music this is music for the rest of us with some common sense. this is a big fck you to all the nasty sjws and a shout out to my boys!cant wait to see the show

^ now that was funny

when will this guy just stop and disappear.

Appropriate name considering how much he loves hard dck.

Frankie Pomeranian from Emmure is not stoked

this is unreal. like fred durst butt fcked after the burial

what is the target audience for this? eleventeen year olds? my god

wake me up when he finally kills himself

this is unreal. like fred durst butt fcked after the burial I would legitimately dig that.

Can we get a goddamn lens wipe?

What kind of soyboyery is this?

target audience is metal heads sick of MetalSucks and all similar jerks!!!!

Trap: shit wanna be rap genre. Metal: Probably the best music ever created along with rock. This song and this "trap metal" is a disgrace. Just saying.

After his first rap album "Party People's Anthem" failed to move to needle, Chris "SlimeLord" Fronzak knew he was gonna need to team up with real life negro to show the kids he takes this shit seriously

I just put this on my mp3 player. That chorus--"But we're never gonna surviiiive, unless, we are a little, craaazy" Am I listenin to the right song? Makes me think about later tonight.. 'bout to get CRAZY yall, hehe. I am David Gunn a.k.a. dcko Sucko/Slurpo. Some of dad's stool didn't flush so I scooped it out of the toilet. I am doin 3 sets of 8 with it right now, then I can rub it on my face. I want to look like Fronzy's colored friend, then prowl Flint to catch a dck in my body.

^ I hope to see more of this level of creativity. Really sent some images reeling through my head. Thank you.

Imagine being an adult and actually being involved with this sh!t

he calls it bone crew and then uses THAT photo. eagerly awaiting people photoshopping dcks into it

I mean, this is pretty bad, but god damn these comments are fcking pathetic, grow up

Damn...that's fcked. Nu-metal is coming back, or wait? Not a fcking shot in hell Fronz. Those are rentals...all of em'

This shit has nothing on the new zillakami shit coming out, this is tier 3 or 4 down compared to zillakami and the morgue

fck the haters, this shit is lit. Fronz is fire. respect.

Trap: shit wanna be rap genre. Metal: Probably the best music ever created along with rock. are you in middle school?

^ dudes above: word Guys look up Zillakami - 33rd blakk glass Then compare that to this fronz stuff. It's like fronz ain't even trying.

Crazy to waste this collab opportunity on a joke

The fact that there are people on Lambgoat backing this project AT ALL lets me know that I pretty much hate most people who listen to "heavy music". I hate these people so much.

Fronz is seriously gay. not a joke. i know. i fcked him. he let me c-m on his face and in his butt.

whats up with that empty ass Florida home... vanilla ice gonna do a flip on that?

Not even good on a comical level, dude just trolls 15 year olds and calls it music. I can't imagine anyone older actually listening to this bullshit.

People who are fcking stupid are stoked!

Look at all you nobodies on here talking shit, what have any of you ever achieved in music or even in life? Nothing. Stop being pathetic, get out of your house and stop talking shit cause you're so bitter your one man black metal band never sold any of the 6 cds your mom burnt for you for your show in your backyard.

Why has he not OD'd yet?

"Look at all you nobodies on here talking shit, what have any of you ever achieved in music or even in life? Nothing. Stop being pathetic, get out of your house and stop talking shit cause you're so bitter your one man black metal band never sold any of the 6 cds your mom burnt for you for your show in your backyard." shut up queer

Timothy Peter Lambesis (born November 21, 1980) is an American extreme metal musician and producer, best known as the founding member and lead vocalist of American metalcore band As I Lay Dying.[1] He also had a solo/side thrash metal project in tribute to actor Arnold Schwarzenegger, Austrian Death Machine, in which he performed all the instruments. He also formed a death metal band called Pyrithion and played guitar for Society's Finest and Point of Recognition.

I spent last weekend in philly at this is hardcore...... i feel comfortable saying this is definitely not what i'm in to.

Someone give him AIDS stat.

I seen this on Fox News