As I Lay Dying to address questions this week 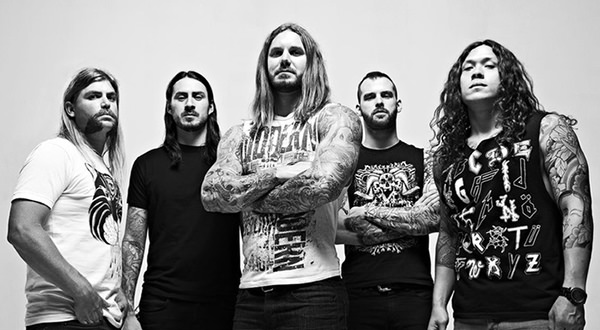 While As I Lay Dying garnered quite a bit of attention (good and bad) last week with the release of their new single, "My Own Grave," many in the industry have been questioning the absence of an accompanying statement. As many of their former (and current) fans are uncomfortable supporting the band in light of frontman Tim Lambesis' past, it was expected that he and/or his bandmates would issue some sort of explanation pertaining to their reactivation and return of the band's "classic" line-up. No such information has been provided... yet. This morning As I Lay Dying attempted to temporarily mitigate the latest controversy by promising to provide answers later this week:
"It's difficult to encapsulate all of the topics we want to address with a written statement. We understand there are many questions and we plan to address them this week."
Stay tuned. Or not.

"Why are we such big pieces of shit?" Because we suck on our own and need the little bit of money we can generate with AILD.

Bill Cosby here, Hey Tim, keep your chin up. We all know it was the roids, just like we knew it was the Ambien with Roseanne. Just blame others. #keeprockin #puddingpops

"We need money and have no job skills"

it all occurred because George W. Bush WAS our president.

"The thing is Tim got out quicker than Wovenwar became successful. All is forgiven, god is good, see you on the road."

Tim took responsibility for his actions and his decisions. You can either support AILD or not. Gtfoh with your holier than thou shit. If he had murdered his wife, would you still support him? Well, if he murdered his wife he wouldn't be out of jail, now and no I wouldn't.

it IS PC to hire a hitman to kill your wife. their isn't anything wrong with that at all. Break downs and Beatdowns!

I don't know about you guys but I think the new YOB album is really good.

I have no moral issue with Tim. AILD just sucks and I'm not 14 anymore. Can you please put out a statement to address this?

People sing about killing their wives and shit at least this guy actually tried to. More credible than most metal singers after his jail time. Lets see him and Fronz fight.

fck the drama. Make music. Let everyone else worry about the other bullshit.

Hitmen that are really cops are stoked!

did anyone see Hereditary this weekend? it was pretty good.

Vince Neil only did 30 days and he killed someone...

They can play all the breakdowns they want. It's not going to stop Alabama from repeating as CFB champion this year.

Loving how the people that don't care about this band are the same ones that comment on every article.

people who comment on every other article are stoked

ISO tickets to see Timothy's enlarged funbags in San Diego? It's for my bachelor party. Either this or a greasy strip joint.

We don't care about attempted murder as long as we can get a paycheck out it at the end of the day. fck THESE SPINELESS BASTARDS. Money rules everything, regardless if you try to kill your wife. Christian scum.

My only question is what Tim's max bench was before prison and what is it now after prison.

the PC era might never end. the implication here is that you blame society for us caring about a dude who tried to kill his wife and that you think it should be okay. please fcking lynch yourself.

if you care about his dumb wife so much, you're on the wrong website you white knight virgin. Tumblr is waiting for you

they owe no explanations to anyone. metal up your ass \m/

All you fggts whining about attempted murder would be the first ones screaming OH SHIT THAT'S METAL AS FCK if they were some ghey black metal band and he has actually murdered her. Kys.

God forgives. Etheopian kids do not.

Hey Tim, Burzum here. You have some issues man. Just showin' some love. When in doubt, WWJD?

Question for the press release. do his t-ts lactate?

maybe they would have gotten a tad less flak had they released the mission statement BEFORE trying to utilize a bunch of idiot christians need for watered down zao rip off breakdowns. but that wouldn't have gotten them press mileage. Are you seeing why this whole thing just reeks of shittiness yet? hey congrats, you sold out a 500 capacity room with a 10 dollar ticket. no shortage of people wanting a cheap entry to watch the freak show.

if there was not a shortage, they would have played the big room at soma. can't even do THAT right

"It's difficult to encapsulate all of the topics we want to address with a written statement. We understand there are many questions and we plan to address them this week." ummm... there was no timeline on all of this dipshits. you had 4 years to figure out how to explain that you had every intention of milking tim's t-ts for your rent. "oh shit, we didn't know our song was coming out... sorry, gotta scramble to explain our greedy motives"

these guys are absolute idiots. 0 self awareness. typical of brainwashed youth group kids. the dudes in this band are probably more bummed out that underoath isn't christian anymore than what their own singer did (which is kind of in line with the fans of this bullshit)

people who wear all over print bright colored hoodies from Hot Topic are stoked.

This band has gotten more attention on this site in the past 2 weeks than they ever did the first time around.

They just completed my PR seminar on how to increase your sales with no cost to you. All you need to do is put a womans life at risk amd endanger the welfare of innocent children. Comes with a free steroid shot if you commit to 3 weeks a year in a time share in the Keys

hey everyone, this is Violent J from ICP here. For the record we are Christian's now and would't kill our wives, however we don't believe in science and are borderline retarded

Hey everyone shaggy 2 dope here. Our fans do not condone murdering your spouse. Pouring faygo on her t-ts at the gathering is okay though.

Beat down in every city they play

As i Lay Toilet

Can we all admit that it'd be kinda funny for him to put a hit out on his band members after this whole debacle?

Aaron "Big c-ck" Bedard here, there appears to be some confusion about this "Final" European tour from my influential and positive hardcore band Bane. Allow me to clarify, this will be the FINAL chance to see Bane in Europe.. Last chance to dance kids, so represent until we return ofcourse for our 2019 package tour

people who never moved on from 2003 are stoked

question i would like answered "how do you sleep at night?"

At least I didn't try to kill my wife. - Harvey Weinstein

Hey everyone, Tim Lambesis here, At least we won't play as bad as The Faceless. Even though a chimp can play most of our songs. In fact, I live with a chimp now since my wife isn't with me anymore. I can tell you this... Chim Chim gives good foot jobs. #chimchim

Hey everyone, Nick Hipa here. It was really easy to write tim off when i thought he would go to jail for much longer, but nobody liked my new band, so I sucked tim's c-ck, pleaded for forgiveness and now i will roll around in my pile of money. oh yeah, we're a christian band again, tell your youth pastor to book us.

Hey everyone, As I Lay Dying's publicist here. You like how we are milking this for everything it's worth by giving an update that we will give an update on the update. Gotta love those press cycles

"As I Lay Dying release statement about releasing a statement."

Just show us your hits already

My penis is engorged with roid rage.