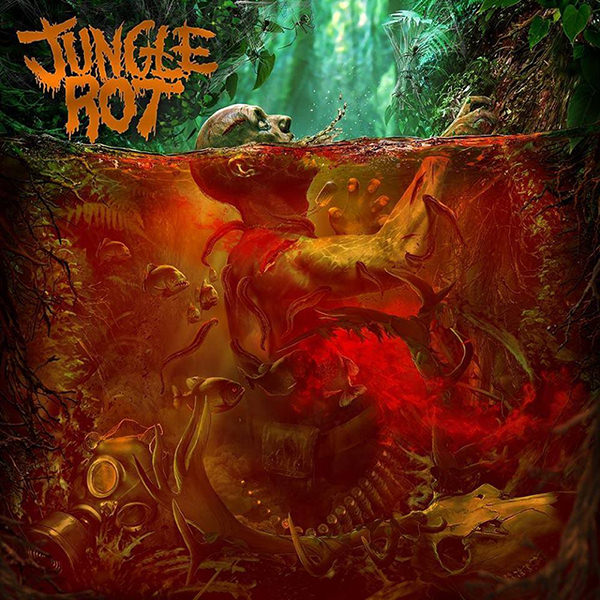 Death metal veterans Jungle Rot have announced plans to release a new studio album this summer. The self-titled effort will hit streets on July 20 through Victory Records. "Expect a beatdown if you aren't prepared," says bassist James Genenz. The album's first new single, "Fearmonger," features Marcel "Schmier" Schirmer of Destruction and can be streamed below. Jungle Rot vocalist/guitarist Dave Matrise explains: "We covered the Destruction classic 'Invincible Force' some years ago and Schmier told me ours is his favorite Destruction cover he has ever heard from any band. Years later we toured together and right away Schmier approached me to start singing the song with him in concert. His trademark style and my vocals worked so well together that when I began writing this new record, the idea immediately came up to have him as a guest vocalist. He loved it and was honored to be a part of it. That's how we created 'Fearmonger'." Jungle Rot track listing: 01. Send Forth Oblivion 02. Delusional Denial 03. A Burning Cinder 04. Triggered 05. Fearmonger (featuring Schmier) 06. Stay Dead 07. Glory For The Fallen 08. Pumped Full Of Lead 09. Twisted Mind 10. Terrible Certainty (Kreator)

FÜCK these jerks. Un-American, commie loving shitbags. If you buy anything from these fägs, not only are you wasting your money, you're contributing to more of this crap.

my nickname in highschool was jungle rot

FÜCK these jerks. Un-American, commie loving shitbags. If you buy anything from these fägs, not only are you wasting your money, you're contributing to more of this crap. --simmer down snowflake, we all get you're having a hard day at Jiffy Lube, but no need to take your frustrations at being a loser out on others.

"FÜCK these jerks. Un-American, commie loving shitbags. If you buy anything from these fägs, not only are you wasting your money, you're contributing to more of this crap." This comment just made me pre-order the record. Even if it sucks the art rules. So whatever. Trim your neck neck beard. fck America.

I am not prepared. Thus, I am worried about the aforementioned beatdown. How should I prepare in order to avoid this beatdown of which you speak.

these guys are faAaAags. i should know. all of them launched loads directly onto my smiling mug.