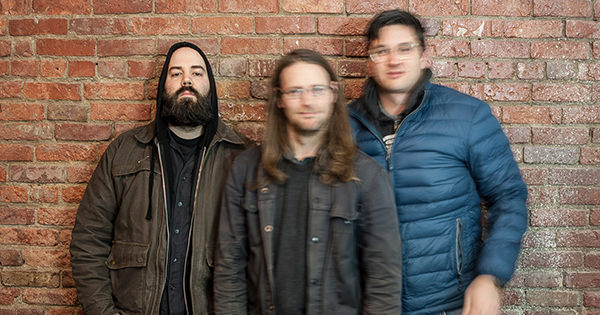 Syracuse, NY grindcore band Ed Gein last surfaced in late 2016, when they released a new 7". Unfortunately, it appears that the record will be the group's last gasp, as Ed Gein has officially been put to rest. Instead, the trio (Jesse Daino, Aaron Jenkins, and Graham Reynolds) has launched a new band called Shadow Snakes. You can listen to a preview of their new music below. Here's a statement from Aaron Jenkins:
"Ed Gein is done. Time passes, things end, new things begin. In my mind Ed Gein is a band of kids in their early twenties who practice for hours every single night of the week and have endless energy. That hasn't been us for a long time. The reality is that time marches on. Personalities evolve. Interests change. Attitudes change. Responsibilities accumulate. Goals change. If you'd asked twenty year old me what I thought I'd be doing when I was 36 I'd probably have said something like 'I don't know...dead?' I certainly wouldn't have said that I'd be married and built my own business. The reality is that, to us, and maybe to some of you, Ed Gein hasn't felt like Ed Gein for awhile. It's good to know when to let things go. Have we dragged it along too long already? Maybe. Sometimes it feels that way. I'm sure some of you are thinking 'wait...Ed Gein didn't break up a long time ago?' No. And the specter of Ed Gein has definitely been looming over us. It's time to salt the corpse and light it on fire to start anew. This is not a bad ending. This is not an angry divorce. This is a new chapter. Jesse, Graham, and I are continuing on in a new form. We wanted to try things differently to better fit our changed lives. We aren't those twenty-something year olds that practiced non-stop and couldn't wait to get back in the van. Those guys are dead. In their place are three guys who are closer to 40 than 20, with different priorities. Time to let those 20-something year olds go. So we've made changes, and those changes felt like a new band. It felt right to start fresh and let Ed Gein die. We added a second guitar player in the form of our friend Mike Harriff (formerly of Rust Empire/Rejouissance) and a vocalist in the form of our friend Steve Sindoni (formerly of Breather Resist/Pusher). Old friends. New perspective. New ideas. It feels good. This new band is not Ed Gein, it's an evolution. This new band is Shadow Snakes."