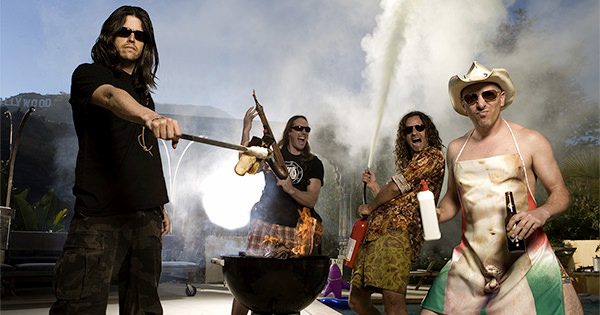 As you are well aware, Tool has been working on a new album for ages. While nobody on Earth seems to know exactly when the album will surface, drummer Danny Carey recently claimed that the record would be out in 2018. That may or may not happen, but frontman Maynard James Keenan now says that he's completed the "words and melodies" for all but one track. While that revelation is indeed promising, Keenan tempered expectations by adding that recording has yet to commence. Here's what he had to say this evening via Twitter:
"Started getting music files from the boys with the word 'final' in the title a few months ago after 11 years of begging. That in theory means the tracks won't change out from under me while I'm trying to write stories and melodies to them. In theory. "Still waiting for the final on one... but way ahead. Words and melodies [are] 100% done on all but one. Someday we'll track them. Long way from the finish line, but at least we're closer."
Meanwhile, bassist Adam Jones also had something to say today about the new album. According to a new Instagram post from Jones (see below), recording will begin in April.

~ Huge fun & honor performing all the new tunes for Guinea pigs Sebastian & #KingBuzz b4 the recording starts in April. Still instrumentals with Mjk in town working on killer lyrics. Exciting! --------------------------Repost from @sebastianbach @TopRankRepost #TopRankRepost How lucky am I? Spent yesterday getting my face melted by 3/4 of TOOL at the TOOL headquarters / rehearsal Studio. My very own private Tool show just missing the vocals! This is not just your average simple rock and roll music. This is progressive metal at its most atmospheric and right when you get into a groovy trance you get beat over the head with riffs so heavy it feels like a TOOL. Some tunes were so pummelling it felt like I was getting a deep tissue massage! in fact they could call the record that. No song was shorter than 7 minutes and some were 20 minutes long! Just my idea of how to spend the perfect day! Thank you so much to my great friend Adam Jones and Justin Chancellor on bass for your hospitality! Danny Carey you are one of the most talented drummers I have ever seen in my life and such a nice fun dude! You are all inspirations to me & thank you so much for the great preview! I can only Imagine what the Majestic vocals of Maynard James Keenan would sound like on top of this music. If it's as delicious as his wine is, then I am buying this record for sure! ???????cheers guys ! It was also great to see Buzz Osbourne the guitar player for The Melvins, who I last saw backstage in Seattle (I think) when we were drinking beers with Chris Cornell decades ago. Always good to see someone still doing great so many years down the line! #Melvins #Tool #MathRock #Rehearsal #rock #survivors