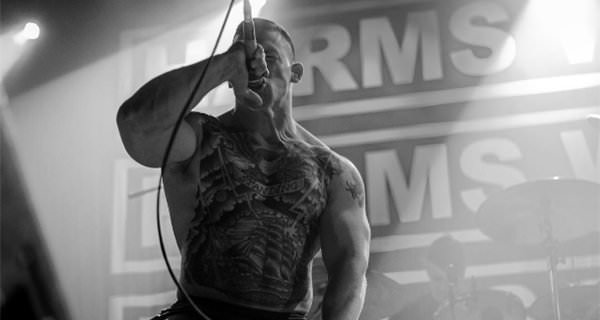 llinois metallic hardcore band Harms Way has revealed details regarding their fourth studio album and Metal Blade Records debut. Additionally, they're now streaming the album's first single (listen below). Titled Posthuman, the new record will hit streets on February 9 through Metal Blade. "We've always stayed true to who we are and allowed the songwriting process to take shape organically from record to record, and as the band has progressed, our sound has become more refined with metal and industrial influences," says drummer Chris Mills, while guitarist Bo Lueders sums up the new album in this fashion: "To a Harms Way fan, I would describe 'Posthuman' as a blend of 'Isolation' (2011) and 'Rust' (2015), but it's sonically way more insane. To anyone else, I would simply say it's full on heavy and full on aggression." Posthuman was produced by Will Putney (Every Time I Die, Counterparts) and its lead single, "Human Carry Capacity," can be streamed here: Posthuman track listing: 01. Human Carrying Capacity 02. Last Man 03. Sink 04. Temptation 05. Become a Machine 06. Call My Name 07. Unreality 08. Dissect Me 09. The Gift 10. Dead Space

fck, this makes me miss Reality Approaches and No Gods, what happened to all the sick riffs and catchy hooks this band use to have? They're just generic metalcore now

who will they rip off next, fear factory? or will that be code orange

Now this is what the fck I'm talking about, finally I have a soundtrack for the quarry

Please go back to sounding like a grindier Integrity

i know the fanbase of older HW/pulling teeth/etc still likes to think they're above bouncy/ultra-syncopated mosh music, which is all 'metalcore' ever really meant, but this is probably really really fun for them to play and it sounds awesome. all their changing styles and postures have been effectively derivative and it's cool they're doing this one now

whole lot of twigboys on here scared of people who go to the gym I guess? lmao sucks to be you, stoked for this record. Hope it has more riffs than rust did. Isolation is the fcking shit.

Not feeling that new track particularly but still have high hopes for this record, I'm one of the few I guess who rated Rust quite highly, though Isolation and No Gods No Masters were better

This is straight trash, what happened to this band? (And yes I lift you f@ggots)

How fast till Jamie Morgan rips this off?

the c-m slut punching bag from code is pissed

Little gay ass bitches here are music experts. This track rips and hopefully the rest of it does too

^ fina-lly.. anotha G..spittin tha truth like young- zombie ronny! ronzilla back from tha dead-worms crawled in ya boys head! i rose up from dirt like jesus in a su-preme sweat-shirt! at night i stalk tha streets for fresh living meat, take em back to my crib tie em down n skeet-skeet!! yaa young ron be rapin, rectums for tha takin, they stuffed me in a casket my eyes still full a maggots!

i aint hold u fo ransom- u get abused by a yung phantom! ronny G tied u down u freaked out threw a tantrum! listen up fckboy now u ronny new fcktoy- ur rectum i threaten, yo teeth all knocked out- young ron playin ball and ur ass tha dugout! lube up ur cavity plunge new depths of depravity- ur jerk hotel show me great hospitality!

suckin tha undead member our sex hot like some embers! gaaye as f*k u transgender- my body shut down its nervous center! when i took my last breath yung ron experienced death! from tha womb to tha tomb back to my zombie sex room! an thats where u stay cuz my sagea-u f*kin gay! yung ronny look fly with new kicks and hair spray

^ stfu loser. No one is reading that. Ever. Still

I love this band but that fake tracklisting is killing me man. If only this were Reddit you'd get that Gold homey.

Harms way is cool but how many times are you going to bend on that same fret. Super repetitive..

I like this one song they've been writing over and over for a few years now.

^^^ same 3 comments from tha same f*kboy- he be yankin on his weeny to his mommys playboy!- photo shoot, from 30 years ago- that fgggt jerkin to his mommy and on purpose he knows! That what he get off to-young Ron a different dude- wit fly looks and fitted caps I was brought back wit voodoo! I'm talkin back from tha dead - fck nggaz huurd what I said - I crawled up out the grave wit a mission to enslave! 13 gimps in tha attic I was risen wit magick-Haitian spell got me up out of hell!

I tease ya wit my balls, slap em on ur face young Rons the law - I ain't wear no condom-wouldn't even fit my lime green johnson - it 13 f*kin inches spread ur asscheeks tell my bitches! They open up wide, ronzilla slide inside - pump ur rectum im expectin respect from tha slaves in my collection! This ain't no democracy my c-ck spits fire-actually - it spurt out huuge waves, of a black bile- I straight defile!

Are there any newer bands out who sound like harms way when they were good?

Throwdown's pinnacle album Vendetta was the pure inspiration for this and anything else after 2001 that made you look at muscles and get an erection.