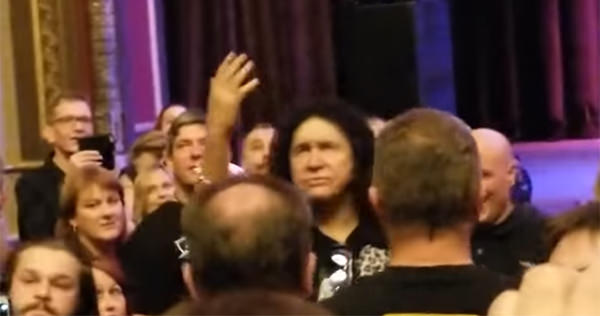 Last week Gene Simmons of Kiss fame was in East Providence, Rhode Island to accept a key to the city from East Providence City Councilman Brian Faria. The presentation was briefly derailed when a heckler started yelling things like "Ace is better than this!" at Simmons. Strangely, it appears that the troublemaker was none other than Josh Martin, who played guitar for infamous grindcore act Anal Cunt from 1996 until their dissolution in 2011. After enduring the heckling for several moments, Simmons grabbed the microphone and asked that the house lights be turned on so that he could indentity the heckler. Simmons then left the stage and proceeded to seek out Martin before returning a few minutes later. In the interim (see second video), Simmons did seemingly confront Martin and a near-scuffle was defused by security. You can view video footage from two perspectives (one from the audience, and one from Martin's location) below. >