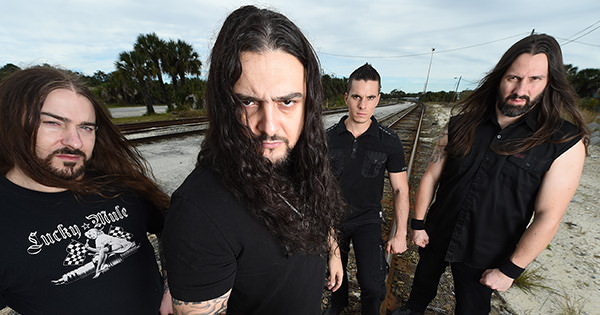 Official press release: Montreal based extremists Kataklysm have spent the last 25 years cementing their legacy in the extreme metal genre. 2016 marked a whirlwind of excitement as the band added a Juno Award to their collection as well as landing their highest Billboard charting. Today, the band celebrates their partnership with Nuclear Blast with a new worldwide deal. They are one of a handful of bands that have the title of "Longest Standing Artist" on the Nuclear Blast roster. Born in 1992 from the cold winds of Montreal, Québec, Canada comes one of the country's top extreme musical exports to date: Kataklysm. With a career spanning 25 years, Kataklysm is a leading force in the most brutal and powerful genre in heavy metal and has conquered territories such as Europe, North and South America, Australia, and Asia while recently becoming the first Canadian metal band to ever play South Africa. "It's hard to believe so many years have passed", comments Kataklysm frontman Maurizio Iacono. "It all feels like yesterday we released our first album, Sorcery. Today, we stand here a humbled band with lots to be thankful for, one of those deserving of our gratitude is our label Nuclear Blast and the people who work there. They have always stood behind Kataklysm from the day they discovered us as teenagers, fast forward 25 years to their current staff who are just discovering us. We now re-sign with our home label for the 5th time and stand on top of our game together. There is no better way to celebrate this moment but by releasing a new album. We have secretly been preparing and working throughout the entire year -, similar to the way we wrote our classics In The Arms Of Devastation, Shadows and Dust and Serenity In Fire - using the best technology available: a rehearsal room, garages and our basements. Just like we did when we first started, four guys with a passion for metal, instruments and no outside world to influence us - only now with way more experience. We believe we created one of our strongest and most honest album to date. You will be the judge in 2018 like it should be. Our words don't matter but know this, we are coming out guns blazing in 2018!" Nuclear Blast owner Markus Staiger adds: "Honored that my Canadian hyper-blasters have re-signed with us after 25 years and for the fifth time!! It is overwhelming to have such a long and healthy relationship with a band that has remained in top form and is in its best shape ever! So let's go for the next 25 years, !thanks my friends!" Nuclear Blast America's General Manager Gerardo Martinez comments, "I first met Maurizio and the boys back in 1995 when they were on their first North American tour with Incantation. I had heard the band on the 5 years of Nuclear Blast compilation 25 years ago…little did I know that they were going to be one of the longest standing bands at the label. Here we are, it's been 15 years working with them and proud to haAve the band still flying the death metal flag, here's to at least 15 years more!" Today, the band released an exclusive trailer announcing the upcoming album. Watch the trailer for Meditations, here: