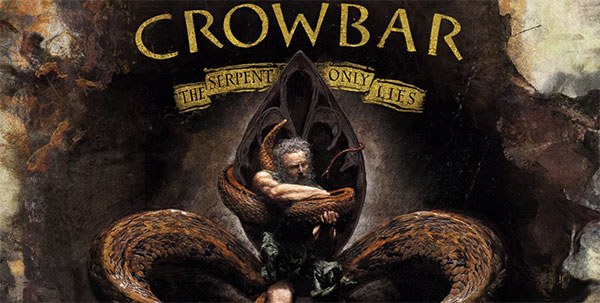 Official press release: New Orleans sludge masters Crowbar have announced their eleventh new LP titled The Serpent Only Lies, due out October 28, 2016. "We are so excited about our 11th studio record! The Serpent Only Lies is a powerful follow up." says frontman and riff lord Kirk Windstein. "Eliran Kantor did a brilliant job with the artwork! Our first release, 'Falling While Rising', is Crowbar at its finest... heavier than ever!" The Serpent Only Lies will be the follow up to the highly buzzed about Symmetry in Black that sold over 4,000 copies in its first week of release in 2014, the highest of any LPs in the band's 27 year career, beating out its predecessor, 2011's Sever the Wicked Hand. For nearly three decades, the name Crowbar has been synonymous with heavy. Since rising ominously from the swamplands of New Orleans in 1990, they've been hailed internationally as one of the world's foremost purveyors of crushing, melodic sludge. The Serpent Only Lies, is both an affirmation of the band's staying power and a nod to their legacy. "To me, it's a fresh-sounding version of old-school Crowbar," says Windstein. "I intentionally went back and listened to a lot of old Crowbar stuff, like the self-titled and Broken Glass albums, to get a feel for what my mindset was 20-plus years ago. I also went back and listened to the bands that influenced Crowbar in the beginning, like Trouble, Saint Vitus, Melvins, and the first Type O Negative record. So it was kinda me doing my homework." The result is an album that stands toe-to-toe with those early Crowbar classics while maintaining the lumbering hooks of mid-period standouts like 1998's Odd Fellows Rest and 2000's Equilibrium. "Even lyrically, the approach was a little more old-school," Windstein offers. "Some of the songs have less lyrics to let the riffs breathe a little more, which I had kind of gotten away from over the years. It was a conscious thing to go back to that." The tour cycle for The Serpent Only Lies marks the return of original Crowbar bassist Todd "Sexy T" Strange, who left the band back in 1999 but now joins Windstein, drummer Tommy Buckley and guitarist Matt Brunson in forging Crowbar's future. "Todd helped start the band, so having him back is important to me and, I think, the fans," Windstein offers. "It's a great feeling to be standing onstage next to him. It's a breath of fresh air for the band and makes us stronger." "Having this be our eleventh record, we're very fortunate because so many bands don't last this long," Windstein adds. "My whole outlook on music as a career is the Motörhead outlook, which is that slow and steady wins the race. If you continue to put out killer records, continue to kick ass onstage every night and continue to treat your fans with respect, that's the stuff people will remember."

This will be way heavier than Justin Lowe playing a riff in the front seat Ryan Dunn's car. B SANKUS

Dudes who get yelled at for stage diving are stoked.

19 year-olds who take selfies in 1992-era Type O Negative shirts that cost $300 but exclusively listen to Drake are stoked for a hot minute.

^^^ something that precise means you're the exact same thing you describe, or wish you could be

"If you continue to put out killer records, continue to kick ass onstage every night and continue to treat your fans with respect, that's the stuff people will remember." Saw them live a festival in 2010, Windstein was total diva and kept complaining about the crowd not being loud enough etc.

Ash can hold a 16kg fletchinder on his arm no problem

Hardcore kids who used to talk shit on metal are stoked.

PRINCE MOCAINE AND HIS MINIONS ARE STOKED!!!!