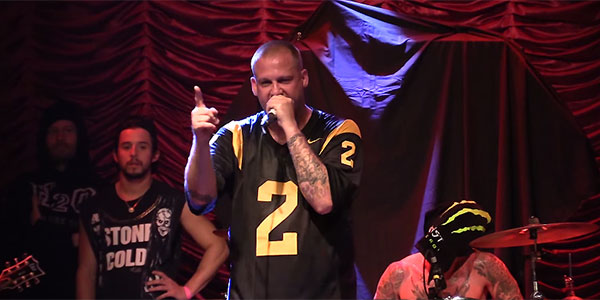 Scott Vogel, vocalist of California hardcore band Terror, has missed several successive shows on "The Life & Death Tour 2016," also featuring Power Trip and Harm's Way, among others. The group has yet to address the matter, and the date of Vogel's return is unknown. Promoters are being told that Vogel has "thrown out his back." Footage of Terror performing without Vogel can be seen below. You may recall that a year ago Vogel left tour early due to a "disc problem" in his lower back, ultimately forcing Terror to bow out of the "Life & Death Tour 2015."

UPDATE: Scott Vogel has now issued the following statement.
"This is a pretty tough thing for me to write from my apartment in Los Angeles while the rest of Terror is out on the road. Truth is, the last few months have been a few of the worst in my life. I've been dealing with neck and back disc issues since Hellfest in New Jersey and the Sick Of It All / Champion tour we did in 2004. Physical therapy has always solved the problems for the time being and I'd be back out on the road; but not this time. Terror finished a European tour in mid-May, I flew home and went right into a surgery on my neck - a three level posterior decompression. "I knew this was going to be hard on me, but I don't think I really had a clue just how intense spinal surgery really was. I rested a ton and when I was ready, I began the post-surgery therapy, knowing I had two months before the Life and Death tour started. The tour began July 6 in Chicago and probably against my better judgement I was there on stage. After the next show in Louisville I was feeling fucked up and in a lot of pain. It was pretty obvious I wasn't healed enough to be out on the road, so I decided rather than try to 'tough it out' and really mess myself up permanently, I was going to put my health first and fly home. "Leaving the other guys in Terror to fill my void is a terrible feeling, but I think this is one of the beautiful things that separates hardcore from most other forms of music. A Terror show is way more then me on stage or even the other guys in the band. It's an energy. It's a pulse and a feeling you get from the music, words and also your love and belief in this scene. David will be taking over for me on the Life and Death tour and for anyone that's familiar with Down to Nothing, you already know he's a great frontman. If you reading this and you are a supporter of this band and you're coming out to one of these shows - we could really use your postive energy more than ever. Terror has always invited and welcomed all of you to get involved with the live show so move up front, sing along and help us get through this. With the right attitude, we can turn this shitty situation into something positive. "To anyone that feels let down by me not being out there: I am very sorry. This sucks worse for me than you probably imagine and I hope you can have some understanding. I'm not exactly sure when I will be back to playing shows, but I know I am focused on getting myself healthy and back to full strength. More than anything, I want to not be living my life in constant pain and for Terror to continue making music and playing around the world."