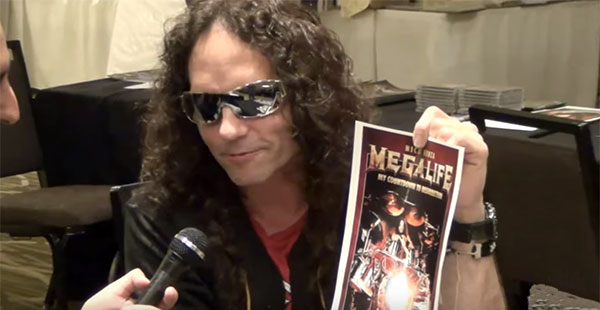 Former Megadeth drummer Nick Menza passed away last night (May 21) while performing in Los Angeles, California with the band OHM. Menza, who was 51 years old reportedly collapsed during the third song of OHM's set. Heart failure is the apparent cause of death. Menza was a member of Megadeth from 1989 through 1998, and again in 2004, performing on what are arguably the two most popular Megadeth albums, Rust In Peace (1990) and Countdown To Extinction (1992). UPDATE: Megadeth mastermind Dave Mustaine had the following to say via Twitter: "TELL ME THIS ISN'T TRUE! I woke at 4 AM to hear Nick Menza passed away on May 21 playing his drums w/ Ohm at the Baked Potato. I'm gutted." Megadeth bassist David Ellefson wrote on Facebook: "Condolences to the Nick Menza family and friends. We have lost a gentle giant... A true artist and friend to us all." Former Megadeth guitarist Marty Friedman had this to say: "We all know the great and unique drummer that Nick Menza was, but he was also a trustworthy friend, a hilarious bandmate, as well as a very loving dad. I`m beyond sad, did not see this coming at all. RIP Brother." UPDATE #2: Dave Mustaine has now issued a formal statement regarding Menza's passing:
"I woke up this morning to a text message from my son, with the news of Nick Menza's passing. Shocked, devastated and saddened don't begin to describe my feelings. "Originally a tech for the band, Nick soon displayed such talent and personality, it didn't take long for us to realize he belonged on stage with us, behind the kit. We asked Nick to join Megadeth as our drummer in 1989. At the time, the band already had its first platinum album, which only served to stoke the fire. We all wanted world domination — with so much of our lives and dreams ahead of us. As we navigated through the pitfalls of life and the music business, our first album with Nick, 'Rust In Peace', and subsequent albums 'Countdown To Extinction' and 'Youthanasia', kept up the momentum. We parted ways after 'Cryptic Writings'. We, like all brothers, would disagree at times, but our bond was strong throughout. "As a player, Nick had a very powerful jazzy flair, unpredictable and always entertaining, And as great a drummer as he was, the time spent with him as a person, a bandmate, and a friend was even more fun. "There were several times we discussed him coming back to the band, but for various reasons, it never came together. We've been in touch all along, he had come out to our shows recently, and he had remained a great friend, a true professional and a larger-than-life personality. "The Megadeth family take care of each other, and expect to hear soon about an initiative to help Nick's children. "All of us in this community are connected, take care of yourself and your loved ones. "My deepest condolences go out to Nick's family."

Disable the family. Think of the comments.

THIS IS GONNA BE GOOD!

Wasn't he the one who introduced Dave to smack?

SHOULD HAVE BEEN LARS

Such a brilliant force behind the drum kit. He will be missed.

Wait, nope it was Samuelson. I'm the goose fellas. R.I.P.

Cocaine is a hell of a drug

No better way to go out

Typical pubescent lambgoaters making a joke of someone's death. May you all get hit by your school bus tomorrow...

^ Will never be one of us. Honk honk

first he gets on stage to do a show, then he straight up dies like a little hoe

Matt Fox here. I nearly spit out my cereal while having a fcking gross breakfast with a fan! Truly and veritable a great loss and all of us misanthropes and miscreants of the Hulud collective send our most profound sympathies.

"first he gets on stage to do a show, then he straight up dies like a little hoe" ^That IP should be investigated.

cant "88" think of anything more original than "bummer... RIP" i agree other posters is childish and imature.

Dave Mustaine "The Megadeth family takes care of each other" Nick Mensa, fron last year: "To: Dave Mustaine in regards to my publishing royalties. I find it very unprofessional that you conduct business like a child, quit playing games! be a man and stop taking food from my kids mouths. It's my earned money, Not yours. quit ripping me off. WTF?"

I'm forwarding this story to a few screen writer friends... this is a Hollywood move waiting to happen.

I WISH CELINE HAD DIED INSTEAD

lol @ the baked potato. why are people always surprised when someone dies from drugs?

this is sad. do u think he has an xtra kit? the demonstration is reuniting and yes i have a job but i don't have enough time to save up for a new kit so i need his or some money for one. thnx -pete jackson formerly of the demonstration and KWD

Will never be one of us. Honk honk