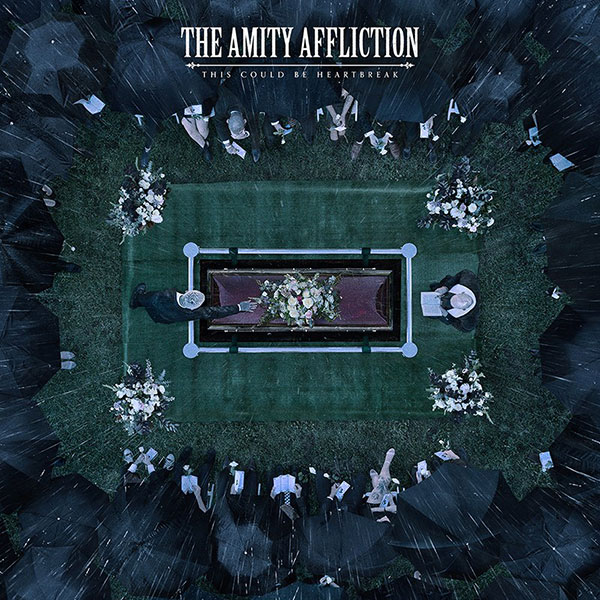 Australian post-hardcore/metalcore act The Amity Affliction has officially unveiled plans to release a new album this summer. The outing has been titled This Could Be Heartbreak and was tracked by producer and engineer Will Putney at both Holes and Corners in Melbourne and Sing Sing Studios in Cremorne. An August 12 release through Roadrunner Records has been set. In addition to its tracklisting, a video for the album's lead single "I Bring The Weather With Me" can be viewed below. This Could Be Heartbreak track listing: 01. I Bring The Weather With Me 02. This Could Be Heartbreak 03. Nightmare 04. Tearing Me Apart 05. O.M.G.I.M.Y. 06. All Fucked Up 07. Fight My Regret 08. Some Friends 09. Wishbone 10. Note To Self 11. Blood In My Mouth

perhaps we are presently witnessing the revival and imminent return of early to mid 00s funeral/eulogy/epitaph/etc . themes (metaphoric or actual emphasis on dying connotations) through imagery and lyrics at this juncture. Unsure if the music correlates, but in any case practitioners of the 'original' metalcore (not screamo or post/hardcore) sound should surface. Would only make sense since troo/hxc crested and nu-metal/nu-core seemingly will soon follow suit. and time never stops.

It's literally always the same album over and over again with this band. Every song sounds the same, every song is either about getting over your suicidal thoughts, or being sad because other people have suicidal thoughts. Jesus.

a day to remember core

wasnt all of this a my chemical romance video?

Matt Fox here. This, friends, reminds me of a fcking gross breakfast I had with a fan one time. It was a particularly gloomy morning in Canton, Ohio so we just decided on listening to BURN and two stepping in his living room. Rest assured it was sincere! Excelsior!