The lineup has been announced for The Summer Slaughter Tour 2016, which will kick off on July 23 and run through August 21. Dates have yet to be announced, but confirmed participants can be found below (with several more to be revealed shortly): Cannibal Corpse Nile After The Burial Suffocation Carnifex Revocation Krisiun Slaughter To Prevail Ingested 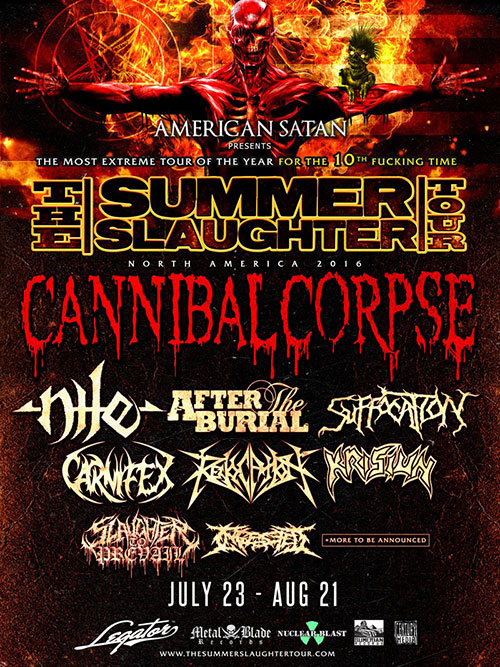 I have to get my bench press game on point for all the push m0$hing i am going to be doing.

will be there flying the camo wall flag for carnifex and after the burial. even harder back if JFAC or Despised Icon is the TBA band.

this is a sick ass poster. admit it, snobs.

What is American satan presents?

What time does Nails play?

I dig ATB and all, especially since us simple Minnesota folk love to heap semi-deserved praise on mild-moderately successful bands...but goddamn do they stick out like a thumb that's not only sore, but has AIDS. And diabetes.

I'll be at every date having a blast. Despised Icon or Beneath the Massacre are totally the only candidates for the TBDs. So stoked to see After the Burial considered on par with NYDM pioneers Suffocation. 'DJ'

What is American satan presents? It's the sure to be terrible movie Ash is making.

Finally shaping up to be a great fest! Just cut After the burial and put Despised Icon or Job For a Cowboy (MIA as of late)

Should be all Summerian Records deathcore bands.

lol at putting "fvcking" on the poster. so professional.

^ pees in own mouth for fun