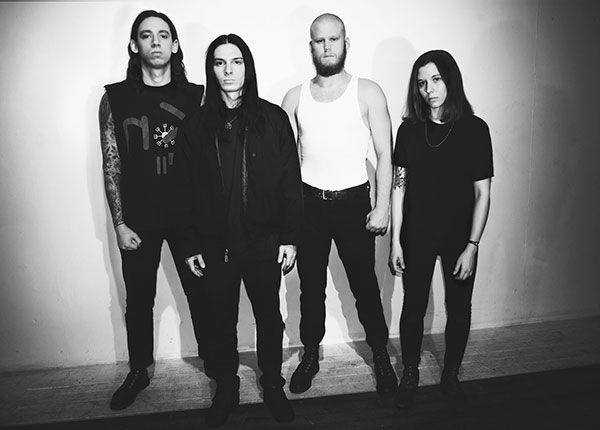 Official press release: Roadrunner Records is excited to announce the signing of Pittsburgh, PA's Code Orange. The progressive unit comprised of Jami Morgan (drums/vocals), Eric Balderose (guitar/vocals), Reba Meyers (guitar/vocals) and Joe Goldman (bass) have gripped listeners and press around the globe with their visionary compositions and aggressive power. This spring Code Orange will join Deftones on a U.S. trek which is set to get underway May 10th in Memphis, TN and continue through the end of the month. Code Orange are also set to perform at number of festivals later this year including a highly anticipated set at This Is Hardcore Fest 2016. Code Orange first turned heads under the moniker Code Orange Kids with a series of tapes and 7-inch singles. At just 17-18 years of age, the band released their 2012 groundbreaking debut LP, Love Is Love / Return To Dust, which NPR declared "…an untamed, unpredictable beast of a hardcore record… a sign of where we're at in heavy music — fewer boundaries, more ways to crush eardrums." In September of 2014 with Code Orange approaching their 20's, the band officially dropped "Kids" from their name to release their landmark second LP, I Am King, which Pitchfork asserted as "…the most forward-thinking post-hardcore record of 2014." Crashing through the confines of genre limitations, Code Orange proved that their power lies in their fearlessness and audacity which has placed them at the front of the pack. Dave Rath, SVP of A&R at Roadrunner Records commented on the signing saying, "Now is the time for the next generation of heavy bands to take the torch and run with it. Code Orange is at the forefront of that generation, pushing the boundaries and changing perceptions of what heavy music will be for the future. As the premier lifestyle label in heavy music, Roadrunner Records is proud to announce Code Orange as part of a roster rich with a history of game-changing bands. This band is sure to change the game for all who follow."