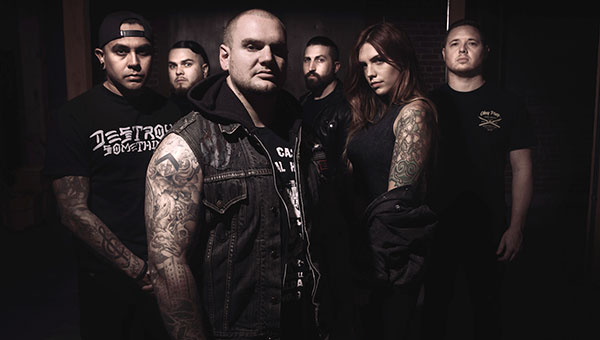 photo by Bryan Kirks
After a two year hiatus, California deathcore band Winds of Plague is now poised to return. Hard at work on a new album, the group has announced that they've signed a recording contract with Good Fight Music/eOne Music. According to the band, "Stay tuned as we unravel more details in the coming months." Additionally, Winds of Plague has lined up a June tour of the West Coast with Rings of Saturn and Enterprise Earth. Dates can be found below. Frontman Johnny Plague comments:
"Over two years ago Winds Of Plague played a show at Chain reaction in Anaheim with Bleeding Through on their farewell tour. While I was walking off that stage I was certain that would have been the final Winds show as well. We had an amazing 10 year run, played some wild shows, met a lot of great people and now it was time to focus on ourselves as individuals and let Winds fade into the background. However, I was wrong. Now, in 2016 we find ourselves grounded and in a place to return to the stage. After playing a handful of SoCal shows the fire and passion is raging harder than ever and we are very excited to announce our first run of headlining shows in years."
6/8 Mesa, AZ @ Club Red 6/9 Farmington, NM @ Top Deck 6/10 Lubbock, TX @ Jakes Sports Cafe 6/11 Austin, TX @ Grizzly Hall 6/12 Ft. Worth, TX @ The Rail Club 6/14 Tucson, AZ @ Club X's 6/15 Hollywood, CA @ Whiisky A Go Go 6/16 Santa Cruz, CA @ The Catalyst Club 6/17 Orangevale, CA @ Boardwalk 6/18 Petaluma, CA @ The Phoenix Theater