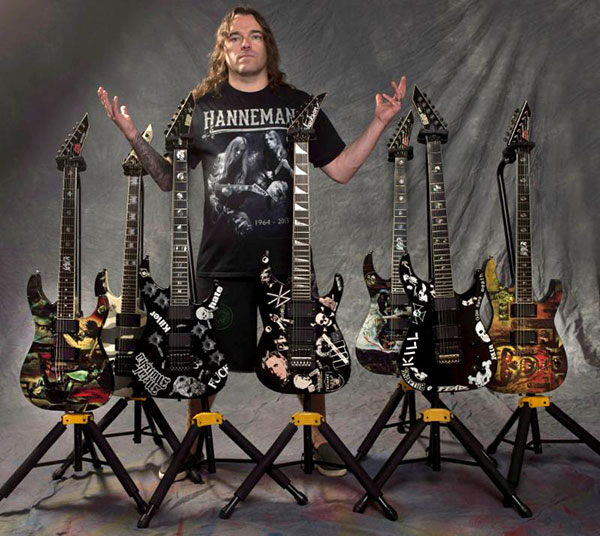 Official press release: The January 2016 issue of Guitar World Magazine has an exclusive, compelling, and unique feature regarding the reactivation of famous guitars owned by Slayer's late guitar-god, Jeff Hanneman. Scores of extreme metal bands have been influenced by Slayer over the years, but Jeremy Wagner, guitarist for death metal outfit Broken Hope, has taken his love and reverence for the band-and, in particular, guitarist Jeff Hanneman-to new heights. The guitarist and songwriter is currently composing music for a new Broken Hope record, their second since reuniting a few years back, and he's doing it using only guitars that were previously owned and played by Hanneman himself. From the oldest and most iconic to the two most recent models Wagner acquired from the late great Jeff Hanneman, Jeremy Wagner has vowed to compose the new Broken Hope album exclusively with these legendary guitars. "Riffs are just flowing out of me." states Wagner in the exclusive interview with Guitar World. "I feel a real responsibility to Jeff and to Kathryn to use these guitars in a way that honors him. As long as I own these guitars, I will use them and carry on Jeff Hanneman's legacy. He remains a huge influence to me, and I probably wouldn't be here as an extreme metal guitarist/lyricist without him." Broken Hope is currently in Wagner's home studio doing pre-production for their seventh, as-yet-unnamed studio album, due out for release in 2016. Additional album details to come.

bullshit is also flowing out of you.

How embarrassing to give a shit about recording an album with some other dudes guitar, and thinking that is more special somehow. Makes no difference.

This is the most "who really gives a fck" announcement of all time. This dude should be fcking embarrassed. His friends, family and bandmates should be embarrassed!

LOL at anyone giving a shit about this gimmick.