The Ghost Inside: three members in critical condition 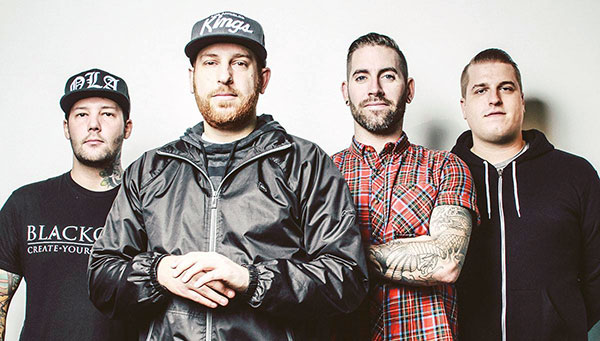 More information has now come to light regarding The Ghost Inside's fatal bus crash yesterday morning near El Paso, Texas. Killed in the head-on collision along U.S. 62/180 were the driver of the band's bus, Gregory Hoke, 31, and the driver of semi, Steven Cunningham, 64. Meanwhile, The Ghost Inside vocalist Jonathan Vigil, drummer Andrew Tkaczyk, and guitarist Zach Johnson are said to be in critical condition. Additionally, band bassist Jim Riley and touring guitarist Chris Davis were injured as well, though less seriously, and are in stable condition. A report from KFOX14 addresses all of the bus occupants' conditions as follows:
The Ghost Inside band members, Andrew Tkaczykt, 28, Jonathan Vigil and Zach Johnson, 28, received serious injuries and were transported to University Medical Center via helicopter. They are said to be in critical condition, officials said. Nathan Wilden, 31, of Topeka,; Armando Cardona, 32, of Phoenix,; Charles Anthony Billings, 27, of Maryland,; Danny Lupio, 29, of Garden Grove, Calif.,; Timothy Irons, 27, of California,; Christopher Davis, 25, of Maryland,; and James Riley, 34, of Nevada, were traveling with the band. Their injuries are said to be serious, officials said. Lupio and Billings are said to be in critical condition, while the other victims are in stable condition, officials said.
A Gofundme campaign has been launched to benefit The Ghost Inside, their crew, and the deceased driver of their tour bus (notably, Bring Me The Horizon has contributed $10,000). This is a terrible situation, and our thoughts are with The Ghost Inside, the two drivers, the band's crew, and the families of all of those involved. UPDATE: Bass player James Riley, who suffered a broken ankle in the crash, has now issued a statement in which he says that all of the hospitalized members of The Ghost Inside are in stable condition. Initial news reports listed their condition as critical, so either they've been upgraded, or said reports were erroneous. Here is what Riley provided:
"I've seen news reporting that some of the guys are in critical condition so I'd like to clarify a little bit. Tim and I were at the hospital last night and spoke extensively with each of the guys nurses. They are all in very stable condition and their families are arriving today to be with them. They still very much need your love and support."

Im not a huge ghost inside fan. But why cant this happen to really ghey, shitty bands like emmure or bring me the horizon? God is DEAD!!!!

It is disgusting to see comments ill fated or jokingly when peoples lives are lost tragically. I am in no way a fan of The Ghost Inside or their style of music but this is a band linked to the heavy music community. Bring Me The Horizon either but for them to step up and just donate $10,000 dollars to this GoFundMe still speaks of how music communities can band together in tragedy rather than laugh and mock someone or something because they don't 'like' their sound.

I don't care what you think of their music, but fck you if you make disrespectful and hateful comments towards them after an acident like that. Bunch of fcking c*nts.

I know lambgoaters have a sick sense of pride about being the worst people in the metal community.. BUT maybe for once you guys can hold off on being deplorable humans with this story?

I really could care less about anybody making shitty comments on this site. But when people comment on these posts about people dying or being injured, it's beyond fcked up. We all know you are sitting in your mothers basement, smoking weed, chuckling as you type your "clever" comment. Just know you are worthless. Absolutely fcking worthless. Death isn't a fcking joke. Thoughts up with The Ghost Inside. You all are some of the best people I've met.

I know lambgoaters have a sick sense of pride about being the worst people in the metal community.. BUT maybe for once you guys can hold off on being deplorable humans with this story? ^^^^^ No dice, narc. Scott Vogel drove the crash car.

Inb4 disable the families think of the comments/vice versa

Just FYI, It's Danny Lupino, not Lupio. This is so fcking rough, man.

Best of luck to everyone involved...get well soon

Really fcking awful. Still really feel bad about Jonathan Athon. This kinda thing can happen to any of us. Hope for the best.

Celine is a fat c*nt

Hope they all die in the hosptial. How dare they kill an innocent truck driver.

Why didn't this happen to CAPSIZE?

This sucks, but what is the point of having a gofundme campaign the day after it happens? Are the families already getting charged medical bills or what?

This sucks, but what is the point of having a gofundme campaign the day after it happens? Are the families already getting charged medical bills or what? Fwiw, they didn't start the campaign. Also, the funeral costs for the bus driver and truck driver.

Fvck all you basement-dwelling neckbeards. Hopefully the same happens to all your families. This is coming from someone who barely even likes this band (they have a handful of catchy songs), but seriously. You Lambgoat dickwagons should consider killing yourselves before polluting another comment section of any website. There is no point to you.

Why couldn't this happen to RHMC

As a previous member of a touring band, this story hits close to home because this almost happened to my band in the mountains of Alabama. Hope all is well with The Ghost Inside... be careful people.

Hope these dudes get well soon ..sad couple weeks for music..and I save my "clever" comments for jerks and dickbags like yourself ..not for stuff like this ..

i donate 11,000 in monopoly monies. actually no that game is pretty expensive. what band is this?

Thoughts up with The Ghost Inside. You all are some of the best people I've met. ^^ up where?

Yo just wanna say I'm glad these posers are out of 'the scene' for awhile. -Scott V

"This one goes out to the truck that hit the ghost inside" ::Moshes:: -Scott V

Can we just focus on the important issue, are they or aren't they hardcore?

Why do people chose to lack humanity for others, especially when it's needed most? Comments such as why didn't a horrible accident occur to another band makes me sick. Extremely sick. People are people, put your opinions on music and people aside and show respect. Have some decency and show some character which a lot of people lack now. The worlds fcked up due to people like that that don't care about other people's lives. Empathy goes a very long way. -blueekangaa

Webby deleted my comment. I said I'd donate only to funeral costs!!

All you first world self righteous little fvckers. too bad. all people trying to shame shit talking because its not "time for that", you're the problem not the solution.

This article is slightly misleading. It says some of the band members are in critical condition, but this is false. They are all in stable condition.

You need to edit your title of all members are now in stable condition.

delete the band think of the comments ray djent clark, scott vogel, heavy chains, david gunn etc "wow i never go to lambgoat i just google articles about my gay shit bands and get mad when I see these comments"

Sankus here. survived the crash. ask me what happened ... broken dick. don't contribute to the gofundme account... run you over with the new tour bus. mention justin lowe... you already know how that ends. Brian Sankus