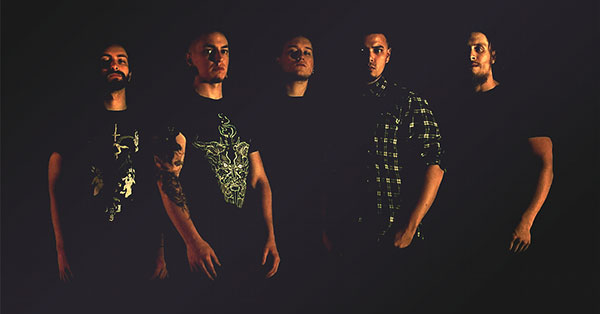 photo by Cameron Almasi
Official press release: Progressive death metal masters, Fallujah, are currently at Sharkbite Studios with producer Zack Ohren (Animosity, Suffocation) recording the follow up to their highly praised 2014 release, The Flesh Prevails. The as-of-yet-untitled-album is set to be mixed and mastered next month with Mark Lewis (Cannibal Corpse, The Black Dahlia Murder) in Orlando, FL at Audiohammer. Comments vocalist Alex Hofman: "We took a considerable amount of time off this year aiming to make not just a new record, but one that sets a new bar for not just ourselves but the genre as a whole. As we begin to enter the studio, we all agree that we've achieved exactly what we set out to achieve. We also have two of the best minds in the game right now (Zach Ohren and Mark Lewis), working together to make this record the best sounding Fallujah release to date. There is a lot of stuff heating up right now, including new tours for 2016, and we couldn't be more excited! Stay posted." A release for the album is tentatively scheduled for some time in the first half of 2016, via Nuclear Blast Entertainment. Until then, catch the band on their European tour this December with Carnifex, Within The Ruins, and Boris The Blade.

People actually still take mean-muggin intimidating promo pics like this??? But seriously Ray DJENT Clark here, these guys should take a chapter out of peripherys book... Or any band in the DJENT scene for that matter... Just look at periphery , they make technical amazing music that is way better than these jokesters and yet manage to go viral with a HILARIOUS music video about mustard and ketchup space ships!!! HEEHAWWW Keep it fun and keep it DJENT Ray DJENT Clark

Boris The Blade ...are you fvcking kidding me? if that's all it takes to make a band name these days

Boris The Blade ...are you fvcking kidding me? if that's all it takes to make a band name these days ... thennn?

Axell Pugh has a man bush.

Axl Rose has a man bush

I get paid over $87 per hour working from home with 2 kids at home. I never thought I'd be able to do it but my best friend earns over 10k a month doing this and she convinced me to try. The potential with this is endless. Heres what I've been doing. www.jobscut7.comCOPY THE LINK

it doesn't even matter. this band sucks

Last album was weak. Bring back the sound of harvest wombs.