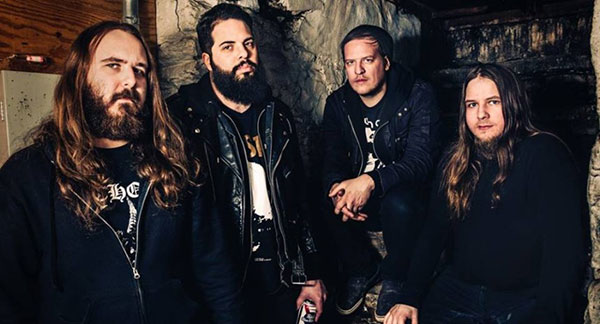 Official press release: American black metal legion, Abigail Williams, will release their first new full-length in three years via Candlelight Records this October. Titled The Accuser and now featuring the punishing lineup of founding vocalist/guitarist Ken Sorceron (ex-Lord Mantis), guitarist Jeff Wilson (Wolvhammer, Chrome Waves, Doomsday, La Chant Funebre), and drummer Charlie Fell (Cobalt, ex-Lord Mantis, ex-Avichi) with recording bassist Will Lindsay (Indian, Lord Mantis, Anatomy Of Habit), the diseased offering was recorded, mixed and mastered in just five days by Sorceron at the band's home studio in Olympia, Washington, boasts a guest appearance by Neill Jameson (Krieg, Twilight) and includes the tripnotic cover renderings of Portland-based illustrator/tattoo artist, Stevie Floyd (Dark Castle, Taurus). Corrosive and grim, Abigail Williams' The Accuser will quickly be viewed as the band's best effort since their genesis in Los Angeles in 2004. The eight hymns comprising The Accuser are bleak, dark, and infinitely engrossing. "It took three years to make this because I'm an indecisive bastard and I didn't want to make the same record again," confides Sorceron of the lengthy gap between full-lengths. "It felt unnatural to try and reproduce what I did on [2012's] Becoming," he continues, "which, up to that point I felt was our strongest album. So once again we are covering new ground with this release. The songs are the most personal to date with the themes mostly being about living shitty, addictions, sex, loss and failure all through the eyes of a nihilistic occultist shithead." The Accuser track listing: 1. Path Of Broken Glass 2. The Cold Lines 3. Of The Outer Darkness 4. Will, Wish And Desire 5. Godhead 6. Forever Kingdom Of Dirt 7. Lost Communion 8. Nuummite