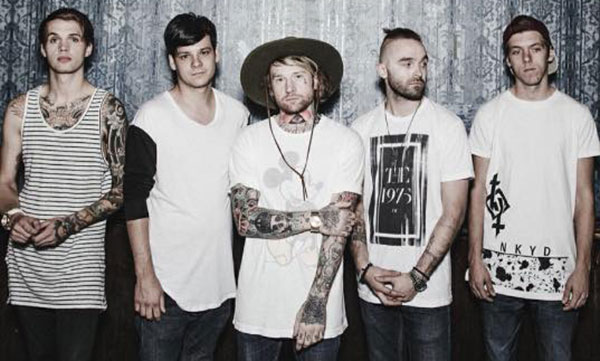 Sacramento, California band Slaves are officially no longer on the Warped Tour 2015 bill. Just three shows into their Warped Tour stint, frontman Jonny Craig did something that someone didn't like (details are still undisclosed) and the band was suspended from the lineup pending an alleged "town hall vote" among tour participants. Last night, the vote apparently took place, and Slaves have been sent home. The band has issued this statement:
I'm going to keep this as short as i can, first i'm going to address the rumors that are NOT true. There were NOT drugs involved nor was anyone in our band looking to buy, or sell drugs. There was NO RAPE or any forceful sexual harassment, no woman was ever touched or even spoken to, just felt uncomfortable by our behavior. We NEVER agreed to Warped Tour, Or to Colleen that we would not drink on this tour. We did NOT empty our non existent sewage tank from our bus all over Let me make it %100 clear that we are not continuing Warped Tour because we were voted off because the opinions of certain people who believe that since Jonny drank, despite his success getting clean, will lead to his relapse. This band has been under a microscope for everything we have done, we have had to bite our tongue for every completely twisted story that hits the internet, and are now being called rapists for something the internet doesn't know about, all of this is because of what people have read about Jonny's past instead of what people KNOW about who Jonny is. We aren't the people you have read about, if you would take the chance to get to know us you would see that every situation isn't what you read of it online. Our first merch person was a very attractive girl whom remains to be our very good friend. You can read her statement here. We stood by jonnys side the last year, we stood by his side last night and we will stand by his side this morning. because we KNOW the truth. This is all we are going to say about this situation.
Meanwhile, Jonny Craig had this to say:
"I have 0 problems admitting I drank but i WILL not say I used drugs. Last nights meeting was a railroad about how I'm still high. I got drunk and treated our Merch girl like she was one of the dudes and I understand this was not respectful behavior and I'm sorry very sorry to Colleen but this isn't worth all this? I don't think the word rape is funny and I don't think anyone should just toss that around. I would never hurt anyone of the opposite sex. I'm sorry for breaking my streak of not drinking and have no problem picking right back up. I have spent a year putting my life back together will REAL change for once and I don't deserve this. Neither do my band who have done nothing but take care of me and picked me up time and time again."