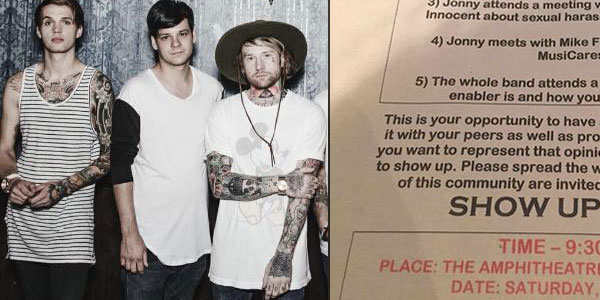 Several days after commencing their three-week stint on Warped Tour 2015, Sacramento, California rock band Slaves was removed from the lineup indefinitely for undisclosed reasons. They did not perform at the tour's Cincinnati and Toronto stops, and it's unlikely they'll play in Washington D.C. today. Among various rumors was that the band was selling drugs via their merch table. Another vaguely mentioned misconduct involving an unnamed female. Neither the band nor tour organizers have addressed the matter, leaving speculation to fester. Without providing any context whatsoever, Slaves did take to Facebook an hour ago to proclaim that "we would never stop playing music. We love you." Meanwhile, this morning a photo (see below) surfaced online suggesting that a "Town Hall Meeting" will be held tonight to determine the fate of Slaves relative to Warped 2015. While it's possible that the photo features a fake document, we suspect that it's legitimate. You'll note that among the supposed stipulations for Slaves' reinstatement on the tour is that frontman Jonny Craig "makes a public apology to Colleen about his drunk'n behavior." I guess we'll have to wait and see what happens. UPDATE: Slaves have been removed on Warped Tour. 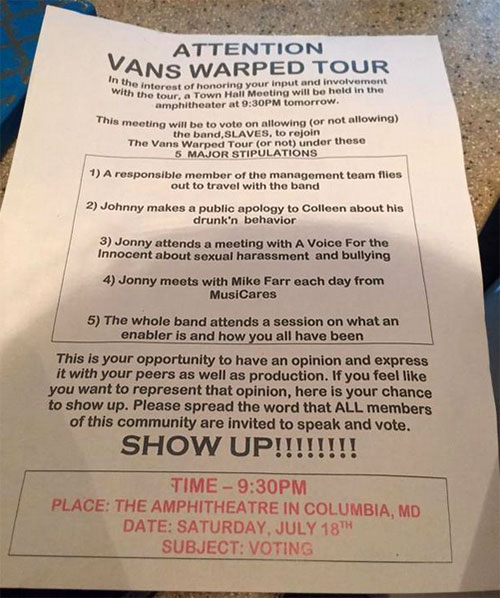 is anyone here surprised?

Well at least I know we're to get my drugs now

how isn't this dude in jail?

Kevin Lyman should discuss what an 'enabler' is for giving this idiot ANOTHER chance.

Slaves sells drugs and beats bitches and gets to stay but Volumes trashes a walmart and gets booted and way worse punishment. Kevin Lyman you are a true gay, not the homie.

Kevin lyman is really a piece of shirt. First letting Front porch step perform a few weeks ago and second even considering a Jonny craig project to be on this tour. No shit something like this was inevitably going to happen.

Publicity though negative attention doesn't compensate for the lack of music....pathetic

"Theyre not living in the real world, it means nothing to them" -Dan Yemin

This dude has been givin chance after chance to turn his life around and he constantly throws it into the trash. At a certain point it's time to just give up and accept that he is human garbage. He loves to be in the spotlight and if he REALLY wanted to turn his life around he would have done it already. Simple fact. Too bad there are tons of loyal 12 year olds that will continue to support his never ending stream of increasingly more mediocre projects as the years go on.

Jonny is probably a piece of garbage, but looking at number three is hilarious. I mean the amount of people in this country lining up for "sexual harassment" and "bullying" professional victim cards is out of control these days. The threshold for either of those accusations has become so low it could be literally anything.

"Slaves sells drugs and beats bitches and gets to stay but Volumes trashes a walmart and gets booted and way worse punishment. Kevin Lyman you are a true gay, not the homie." Volumes was only banned for one day for doing this

If slaves don't preform in Tinley Park Illinois I will commit suicide . ??

i'm working/traveling on warped. This is in fact a real meeting happening tonight. I believe the issue has to do with Johnny asking his merch girl to physically/sexually please him while he was under the influence of who knows what... she declined. All the info I have.

This isn't even true lmao

haha gotta love how many different rumors are going around right now, and yet people are so gullible that they actually believe them

First of all jonny craig is a friend of mine. This dude has completely changed his life for the music. Everyone makes mistakes jonny is a good dude and so is everyone in slaves. I know because i spend time with them ,dont talk shit when u dont know whats going on

^^ he hasn't changed a damn thing. you're just another easily manipulated girl to be cast aside when he bores of you

why do I laugh so hard right now?

Jeff Lohrber will be present at the meeting

Why even try and stick up for this turd. If you two are so fcking tight then have him live with you and fck off.

HE'S A GINGER! NO QUESTIONS OR EXCEPTIONS. Tattos covering dis tasteful skin and who knows how many fcking freckles.

Lot of morons on here. They weren't selling my drugs. Johnny got drunk and shoved his dck in their met him girl's face while she was sleeping trying to get her to suck him off. That flier is real, I'm on warped right now. -Z

Ya know whats sad? This is what made rockstars rockstars back in the day, but now we live in a pussified world where actions like this are no longer tolerable, its why there are no more rockstars, its why nobody listens to rock, in essence, by acting like children your ruining your own music culture. In 20 years are people going to remember any of the bands at warped? Probably not, they will still remember bands like metallica, GNR etc. At least those bands had balls and did what they wanted.

rappers are the new rockstars. and metal bands are trying to dress like rappers. the pssy political correctness needs to go. fck a bitch, pop a pill, snort a line, slam a beer

Just goes to show how unprofessionally this whole situation is being handled considering they let this flyer leak out. This whole thing is a joke just like this article. If there was any solid concrete evidence then they would've been thrown off warped immediately and the authorities should've been notified. If this was a serious situation other MAJOR news sites like AP would've posted something but this is a situation blown out of proportion and is being handled extremely poorly

this is the real slaves https://slavesuk.bandcamp. com

FRONZ HERE. MAN I NEED TO PUT ALL YOU IN CHECK. I SAW THIS GO DOWN FROM MY WORKSHOP CLASS. JONNY, YOURE DOIN IT ALL WRONG. YOURE SUPPOSED TO CHLOROFORM THE BITCH BEFORE YOU BANG. LIFE LESSONS. STAY SICK.

Looks like "Z" just outed that he's distributing drugs at Warped Tour (but not through Slaves). Way too go, dckhead. - Z

this just sounds like rock and roll to me boys. i told my great grandpa about this and he just shook his head. he told me that if led zep got kicked off tour every time robert plant "sexually assaulted" a woman then nobody would even know who the band is today! crazy!

The letter is a fake, there are many spelling errors. Its a severely unprofessional letter.

"Dang now I'll have to go back to my job as fry cook at the honker burger, instead of playing bass for a band riding on johnny craigs dgd hype. FML"-bassist for slaves

Amazing that we've seen more sexual alligations on Tumblr posts than actually going to the cops. If you went to the cops to report it, then it would be different. But hey, tumblr justice will do! The US is so ass backwards that I wouldn't be surprised that North Korea or ISIS has bombed the whole place. At this point, nuking the entire US seems good because I won't wanna live on this planet anymore.

You realize most cops literally just laugh at sexual assault allegations and treat them just like lambgoat commenters do, right? Go join Enabler you scum.

Jonny is such scum. I remember when he was still stringing his fiance along and fcking my friend on the side while completely lying to both of them. Gross.

why hasn't anyone smashed this guys face yet? should be a public stoning

Sucks that their song leaked

this band's name makes me laugh in every title

THIS TOUR IS A JOKE. That entire scene is full of toddler retards