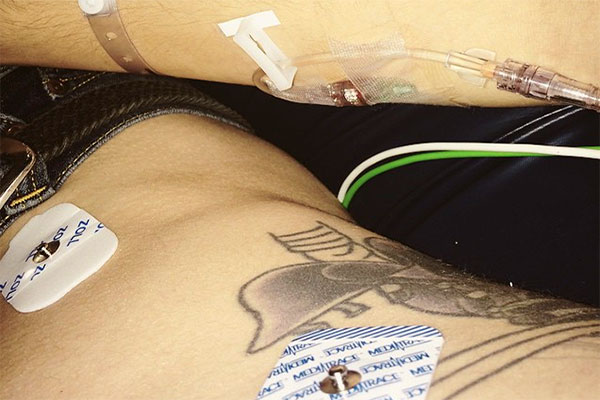 Alex Lyman, guitar player for Sacramento, California post-hardcore/rock outfit Slaves, was hospitalized last night after being stabbed by a "felon." Lyman has issued this update (in addition to the photo above):
"Last night I was stabbed in the side with a 4 inch cut that is 2 inches deep and a centimeter from my spleen. This was all from a felon with prior charges who is now in prison. There was no confrontation and nothing was done to provoke this. It was spilt because I'm a 'faggot in skinny jeans'. I have multiple slices on my throat and arms but only one serious one and I'll still be at all slaves dates. Wish the world could stop hating what they don't understand."

Too bad the assailant couldn't have sliced away some of those fat, blown-out lines on that purple tattoo. Better luck next time.

Sure. The problem is the world doesn't understand gay people or skinny jeans. Yea, that's it.

jonny craig is a felon. if not, he fcking should be

i doubt it was because of no prior confrontation. everybody knows alex lyman is a smart ass who runs his mouth to the wrong people

Skinny jeans sales have dropped since this incident. Give the 'felon' an award.

If anyone needed to be stabbed it was this guy. However, he probably thinks this will help his "street cred."

So, some dude dared to live out the American Dream? Also, it's 11:30 a.m. CST and Fronz is still asleep.

c-cky, mediocre guitarist runs his mouth and gets stabbed. Nothing to see here.

At least he admits he's a gay in skinny jeans.

fronz where r u B(

FRONZ HERE. I COULDNT HELP BUT TO LAUGH AT THIS...LIKE DUDE WHY ARENT YOU ROLLING AROUND STRAPPED LIKE ME? MUST NEVER ENVISIONED YOURSELF GETTING STABBED CAUSE PEOPLE HAVE NOTHING TO TAKE FROM YOU. I DONT BLAME YOU DUDE. AND STOP HANGING AROUND THAT FA990T JONNY CRAIG. HES A BITCH

If there was no confrontation, how does he come up with the gay motive?

GUYS..ITS THE REAL FRONZ..ASLEEP?? LMAO. IM AT MY STAY SICK TENT DOING PHOTOS WITH MY FELLOW SICKIEZ. EVERY KID IS WEARING IDGAF SNAPBACKS AT WARPED THIS YEAR!! KEVIN LYMAN IS BUYING MY MERCH AS I TYPE THIS!!!! GOTTA BOUNCE!!--FRONZY.

MY NAME'S TYRONE AND Y'ALL JUST GOT F U CKED BY FRONZ LONG DICK STYLE!!! WHAT UP FRONZY!

Where's this felon to take care of Radke, Fronz, Palmeri, and the rest of the retards of this music scene?

hey lyman: no one is hating on you, you narcissistic nimrod. people do think you're a self involved idiot who thinks he's way more important than he really is, but no one is hating. in fact, we could give a fck less

ok which one of you did this?

I AM FRONZ AND SUCK MY PENIS

What the fck is wrong with people? A local artist is stabbed solely on prejudice during a performance and you people feel the need to voice your poorly articulated and atrocious hate comments? Congratulate yourselves. Obviously, and unfortunately, the only person who cares about this forum anymore are the author's. No wonder. No wonder people don't spend the time to read these comments.

I wonder what this "felon" would say regarding provocation.

You were stabbed last night and the "felon" is already in prison? Fastest trial in history.

This dude is hella ghey.

Hoax, just trying to act tough saying he will play the upcoming shows. There are no wounds in the picture. He's getting his monthly stuff injection.