Creation Is Crucifixion back with new release, gig 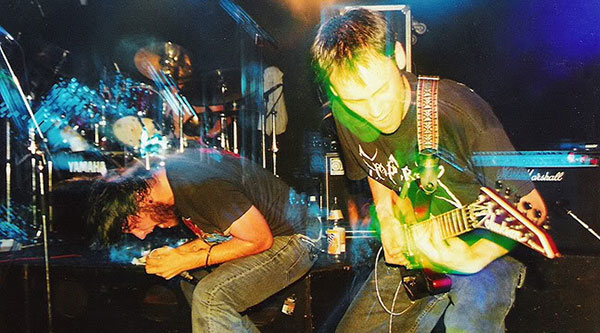 Official press release: Pittsburgh tech-metal hactivists Creation Is Crucifixion has reactivated with a double-LP and live appearance scheduled at King of the Monsters' 20th Anniversary Festival on Saturday, August 1st 2015. Largely inactive for the past dozen years, CIC cut their teeth in the underground punk/hardcore circuits of the late 90's and early 00's. The band's technical approach to death metal, mixed with a staunchly subversive attitude and subject matter garnered Creation is Crucifixion a cult-following. Long rumored for over a decade, Antenna Builder, the 'final' recording by Creation is Crucifixion's last active lineup is a 9-minute opus that brilliantly merges CIC's heavy music along with the noise passages the band became renown for. As one of the highest-fidelity recordings from the band's extensive output, the lineup's similarly oppressive Rerecorded Splits material is being joined on a 45rpm 12" vinyl record released by longtime cohorts Robotic Empire. Accompanying the studio-recordings 12" will be a live LP from a classic CIC's set from on their last European tour, captured Geneva, Switzerland during May of the millennial year. These 15+ year recordings will both finally become available just in time for Creation is Crucifixion's reunion show at King of the Monster Records' massive 20th anniversary celebration in Mesa, AZ at the beginning of August. The band released material with the longrunning label back in the late 90's. In a lengthy new interview with Vice's Noisey blog, CIC vocalist Nathan Martin details his transition from frontman of a hardcore metal band to tech company CEO:
"I got into the noise scene following people like Eric Wood [of Bastard Noise] and he's into noise for a very valid reason, he cares about sound ... I remember him always pushing to be more prolific. Man is the Bastard and Bastard Noise clearly do this, they are prolific. Keep doing it. That's almost a kind of work ethic thing that I even try to do here at Deeplocal, the company I built. Just do it, get it out there, push it and do as much stuff as you can. "We started from a single contract to do some design work. I went back to what I loved doing, which is a little bit of physical engineering, a little bit of software, a little bit of design. I figured I'm just going to use this to do whatever I want to do and we slowly built the company from two people, to five, then eight and now to 25. It was slow, and we're going on nine years now doing that. "What we did really well was always seize opportunities. When it seemed like there was an opportunity, we did it. I treated the company like a band. Everything that I learned from that band... I did with this company. We built a brand that's more or less based on trying to be a metal band as a fucking company."
The Antenna Builder + Rerecorded Splits and Live In Geneva 2xLP will be available in a limited capacity at the King of the Monsters festival, followed shortly after by a widespread release via Robotic Empire.