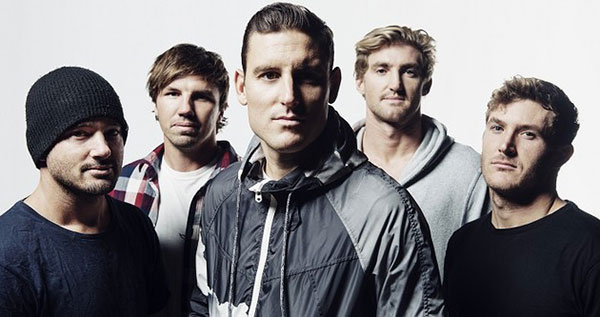 Australian metalcore outfit Parkway Drive has revealed plans to release their fifth album, Ire, on September 25 through Epitaph Records. To coincide with the announcement, the band has premiered a music video for new song "Vice Grip." The clip was directed by Frankie Nasso and you can watch it below. Vocalist Winston McCall says this about the album: "This is the album for us. Every single step of the way, whenever there was gamble to take, we took the biggest one we could. If this isn't the album that can go further than anything we thought was possible with this band and this type of music, that's fine, but we can't go back from this as far as we're concerned."

It's fun. Totally like the Anglo-Saxon riffs but with a bit more rock where the roll should be. I'll take it though, better lost without cause than found with two feet in the woods.

I dig it. Its a fresh new sound for them.

This is better than soap in my peehole

FRONZ HERE. MAN THESE GUYS ARE A BUNCH OF BEACH BUMS RIDING SURFBOARDS INSTEAD OF PORSCHES. AND THIS SONG IS TERRIBAD WITH A BAD VIDEO. WHERE IS THE BITCHES? WHERE ARE THE F UCKS GETTING SUCKED? EXPENSIVE CARS? MANSION? ON A SCALE OF ONE TO EVEN I CANT. STICK TO LIVING IN YOUR VANS AND BUMMING FOOD OF SEAGULLS BROS. STAYSICK

Flaming h0m0 sexual's are stoked. This is so terrible it makes Fronz's rap music sound bad instead of shitty.

This band has had a lot of potential to have a lot of character and they seen pretty cool as people, but they play the most mundane metalcore.

The song and video both fcking suck. I foresee an Atreuyu/parkway drive tour.

Tie me kangaroo down

When did they turn into The Ghost Inside?

Lyrics are posi as fck but the music sounds like dry farts.

anyone else beat off this morning?

Damn what the fck happened to this band? That riff is so stupid and annoying

I was beating off. For further details check your mom's face

Man, they sure have just gone downhill since Horizons.

man, pwd used to be my fav band but this is just terrible. kept waiting for the breakdown that never came.

Damn this is by far the worse i've ever heard from them, I pretty much gave up on them after horizons. Idc if you 30 thats no excuse for this pssy shit. lame

man, pwd used to be my fav band but this is just terrible. kept waiting for the breakdown that never came. SAME

"Most mundane metalcore"? Weren't they just praised for their last album for being one of the most technical bands out there in this genre. This song is on the weaker side I will admit but they are not mundane by any means.