South Carolina death metal veterans Nile are currently in the studio wrapping up the mixing process for their forthcoming album, titled What Should Not Be Unearthed. The album was produced by the band and mixed by Neil Kernon (Cannibal Corpse, Diamond Plate). An August 28 release via Nuclear Blast Records is scheduled. Band mastermind Karl Sanders comments:
"All of us in Nile are happy to announce our upcoming newest album What Should Not Be Unearthed. It's our 8th official album, and this time we believe we have a truly crushing disc to bring to metal fans. The focus this time around is on brutally Heavy Metal riffing and songwriting; kind of like of an Annihilation Of The Wicked approach but very streamlined to achieve maximum destructive impact. Our last record, At The Gates Of Sethu, was super surgically clean and very 'musicianship oriented' whereas the new disc is a polar opposite; Unearthed is aimed straight at utter metal heaviness and memorable songwriting. Although Unearthed is still full of the kind of undeniable musicianship people have come to expect from Nile over the years, it's the songs themselves that will hit listeners over the head this time around. These songs will be a blast to play live, and we are stoked at the opportunity to bring these songs to metal fans everywhere. See you on tour!"
Album artwork was handled by Michal 'Xaay' Loranc and can be viewed below. 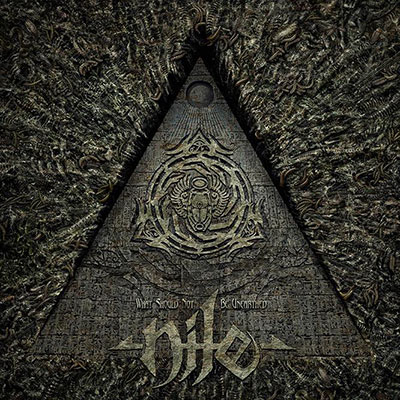